Just Walked Into My Shop

Here's another sign of the times. Nice fella just left the shop without his son's rifle. The man's son is grown and gone but he made the mistake of leaving his little .22 Rossi model 62 SA. She's a copy of the Winchester model 1890 'gallery' rifle. I'm sure many of you have been to the local fair and shot the yellow ducks or some such with the little pump/slide action rifles; like that. Forgive my poor photography, these shots were taken with my cell phone. 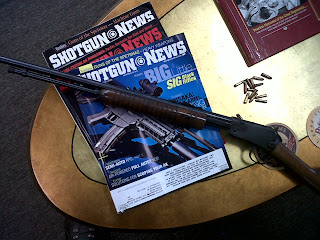 Seems the son owed his father money and times are hard. Son tells his father to sell whatever he wants of the items left behind. Dad said fine. So I paid about a third of the rifle's value. Such is life. 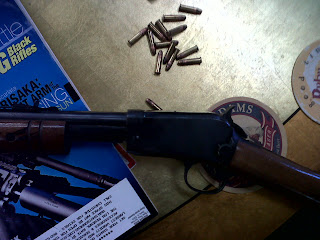 When he first gave me the rifle I asked if it was loaded. He replied no. So I removed the magazine and extracted thirteen rounds. I learned this lesson many years ago. Remember, boys and girls, a gun is always loaded. 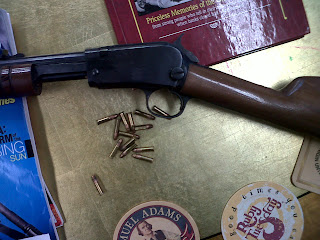 The little rifle is in sad shape. Needs a deep cleaning and a good dose of gun oil. She's been sitting in a closet a long time. A small patch of pitting near the muzzle, dust, and she's as dry as Satan's butt. Still she preforms well, the action is smooth. She'll make a fine squirrel or zombie rifle.

Just before he left he asked if I had any use for a few boxes of ammunition.

Stephen
Posted by Stephen at 4:47 PM