Of a liberal's lack of intelligence.

My old Italian friend dropped by the shop this week and left me several nice persimmons. I brought them home and thought I'd like to use them for more than a snack. Think I'll dig around and find a good persimmon bread recipe. Maybe tomorrow, because tonight I'm whupped.

Today, the both of  us scrubbed our travel trailer. For our trouble the labor asked payment in the form of sore muscles. Went to fire the pressure washer, and as is my luck, the pump failed to function. Said the heck with it and grabbed the buckets and sponges. The ole girl shines.

After I post this drivel I will make an earnest effort to answer all your kind comments. Thank you for your patience. 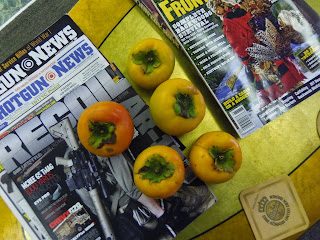 I've followed the CBS program Sunday Morning since the early 1970's, even though I detest left wing celebrity worship media, I like the show.

I read my Sunday paper as the program streams in the background. Once in while I'll drop the paper and give my attention to bits and pieces of the show. My point, heck I don't know. I'm conflicted. I watch a hour and a half program for the last ten seconds of nature. 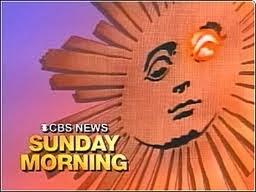 As she dressed for church I slapped on a skillet of hash browns and cracked eggs and tossed bread in for toast. After the coffee maker began its dance I flipped the kitchen towel over my shoulder and went outside for my morning paper.

Our weather has turned towards nice. The river is flat this morning. The scent of marsh is thick and pleasant - and I found a squirrel turd. Large oaks overhang our driveway and the little tree rats love to splat the concert with their droppings. As I examined my new found treasure I felt a presence. It was the poodle walker. He's a retired doctor. Lives across the street. The doc is about four foot nothing and prances around the neighborhood with a mangy poodle tied to his hand.

He seldom if ever glances my way as we have personal issues. His poodle likes to dump own my lawn. I know this because I clean its mess. I know the doc knows and he knows I know his mutt poops on my grass. Get it... We don't like each the other and one of these days, as I once told him, I'll catch the critter in its act. Not exactly sure what I'll do, I mean, I'm an easy enough fella to get along with and I reserve violence only for those that intend harm to me or mine. I believe everyone deserves a second chance, but him and his poodle just might push my unfriendly button.

I'm fairly certain the doc doesn't like me, after all, he walks poodles and I shoot squirrels and paper images of democritters. So, there I am, with my rare piece of squirrel poop in hand, dish towel over my right shoulder, newspaper tucked under my arm on a beautiful Sunday morning wrapped in the peace of the moment when along comes the poodle walker. The poodle tugs at its leash, its beady eyes locked on my grass with a full load in wait of a download.

For Pete's sake, he called it, Sabrina. See what I mean...hey, if you're gonna walk a poodle at least give it a badass name. Something like, Killer or Deathray or Doom.

The poodle walker flicks me a quick glance and strains to control his two pound bundle of fury. Then, "Oh, good morning. Whatcha got there?"

"Sabrina, no. Come back here. Get away."

I mean, after all, how often does one find a piece of squirrel poop. I extended my find.

"My, God, no. Are you cooking breakfast? Shouldn't you wash your hands...I mean, well, that's filthy and those things carry germs."

I'd forgotten the dish towel. "Yep, as a matter of fact if that rat on a leash dumps in my yard I'll have fried poodle for breakfast." Fast on my feet, I am...

He jerks the poodle into his arms and soon his tiny little legs carry him across the street. I yelled and once again offered him the squirrel poop but he never glanced back. 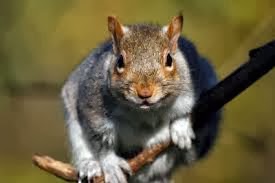 I need to climb from this chair and run finance five gallons of premium gasoline. After my lovely wife arrives home from church we have plans to wash our travel trailer. It's way past time. I'll use my pressure washer and of course I'm slap out of premium gas. I only use the 'ole high test for all my small engined equipment.

After a years neglect the trailer is dirty and its roof holds at least a ton of leaves. Well, maybe not a ton but it is a mess. We've given thought of placing it on the market. Not sure yet. It's a pain to use and to tell you the truth, a waste of space. She's suggested a big tent. I'm thinking, depending on our budget, maybe down the road we'll look at a small class 'c' motorhome. Not sure yet. If we can't pay cash its just a pipe dream.

Either way our afternoon will be spent wet. We should take this time and also unload all the gear. Its full of stuff...canned goods, kitchen gear, two short wave radios, spare clothing, flashlights, medical kits and reference books and novels, three nice gas masks with spare filters, dutch ovens, rope and buckets and a cast net. Fishing gear with tackle boxes, Coleman lanterns and stoves and fuel for same. Like I said, lots of stuff. Then, where do I store all this gear. 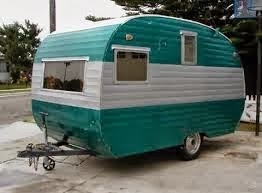 You know, now that I think about it....a tent might just fit the bill.

(No, the classic canned ham trailer pictured is not ours. It's a stock photo off Google. Nice, isn't it.)