It was a very small Christmas tree and sat atop an old RCA radio cabinet, one of the fine polished oak models built prior to the war. The radio gave forth Bach. My mother stepped back after she so gently adjusted its volume. She loved Bach. Christmas and Bach she held, were like cream and sugar with afternoon tea.

It was to be our last Christmas together, a fact of which we were both aware.

My mother was so very poor.

The four of us had gathered in the small room and took seats where possible. I remember my brother and sister sat either side of my mother, a small woman of delicate lines with waste length dark brown hair and high fine cheek bones which reflected her American Indian ancestry. Her eyes dark enough to reflect sunlight under still waters. She was beautiful in both soul and outward appearance. 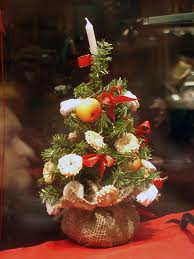 She remained very still had held both my sister and brother's hands and bowed her head. We respected the silence as she cried then composed her thoughts.

I was the older child. Four and five years between myself and my brother and sister. My next step into life would, as a result, take me forever from her home. There was a war. I had taken the oath. We together held fear in our hearts. Life isn't easy.

She began to pray, her voice soft and sincere. Her message to our Father has been lost to the shadows of time but is still recorded in my soul. A simple prayer of love for the season and a gentle request of protection.

As she prayed I remember the warmth of her old oil heater. The flames within so often a comfort to me under the roof of her simple and cleanly organized home built with the few dollars she'd earned from long hard hours at the local hospital.

Then, she rose and took two of three gifts from beneath the tree and placed them in my brother and sister's hands. I watched as they quickly unwrapped their presents. I remember neither. They both smiled as we'd each discussed and agreed prior to this day. They gave thanks and prised her for such wonderful and thoughtful Christmas gifts.

She bent and placed her hands on either side of their faces and gently kissed their foreheads. I waited.

My mother then returned and took the one remaining gift and reached and took my hand in hers. "I'm sorry," she said, "But its all I could afford but the name on the bottle reminded me of you. It seems to describe you so very well."

It was a bottle of cologne. Trouble, by Mennen. I smiled. 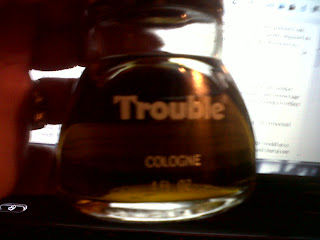 I rose and took her into my arms. This small beautiful woman so full of grace. A woman attracted to books and music and art with a heart of pure gold.

It was her last Christmas gift to me. A gift of poverty, given with love.

I never used the cologne. It has traveled the world with me. It sits on a bookshelf in our home. Its contents have grown dark with age, its cap still silver and untarnished. Its lost very little in volume and when its cap is removed, as it was this morning, it still faintly yields a scent of her.

I lost her to heaven not long afterwards. She was so very young.

Ritualistically each Christmas I walk into my office and take down her last gift to me. I hold it, turn it slowly in my hands and remember.