The Gang & The Gunshow

Just now home from church and fried chicken. Sweet Wife is happy. This is the third time in a month she's tricked me into attending a brick and mortar church.  I've been a good boy- didn't say a word during any of the services. I simply slipped my Kindle out and read, elbow or no elbow. 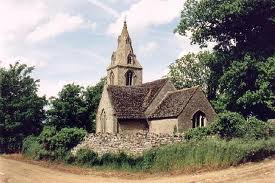 Yesterday was fun. Our group gathered at a local gunshow. The cast of characters included, yours truly and my Sweet Wife. (At first she declined. Then she was informed our good friend, Jacked Up Glock Mom planned to escort her husband, Senior Chief, so Sweet Wife quickly changed her mind.) Along with our other best friends, Pirate Jim, and Rebel, we had a six pack.

Two of our group missed out - Duke, away on vacation, and Shooter Steve. Shooter Steve is a newly wed and has yet mastered the ability to check his email so missed out on a great gunshow and lunch. He's young and I'm sure in time he'll learn.

We gathered at the door of the venue at 0900, after of course, we disarmed. Ironic isn't it...one must first unload their concealed weapons to attend a gun show. So I walk inside with two full magazines attached to my belt.

Gunshows smell good, at least to me. The scent of oil and wood and leather fills the air. I love the racks of old firearms and the bits and pieces of gear and spare parts, cleaning rods and brushes and countless AR grips. Old slings and trench knives with the odd sun bleached olive drab ammo pouches. 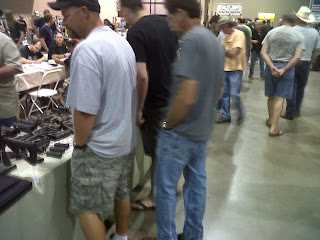 We took our time, ambled along. The prices were very high, almost ridiculous. I've attended many shows in my lifetime, more than I can count, and I've never seen prices reach such levels. Most, I dare say, high retail.  My expectations of a deal died quickly. My want list was small when I approached the door, it quickly shrank. The list included a lower, a few spare AR parts, perhaps some ammo along with .50 caliber ammo cans, and books. 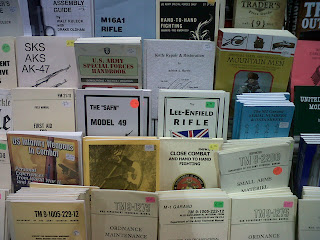 I scored on three out of five. I did find a Ragnar Benson. 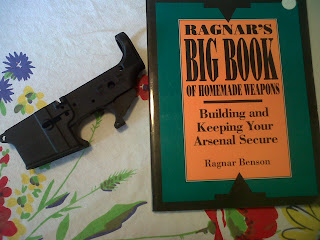 As you can see above, I also found a Spikes lower. I did find a few PMS lowers but the dealer was a pawn shop owner and was awful proud of his inventory, so I passed.

My good friend, Pirate Jim, stumbled across a nice M1. He's a collector of vintage military rifles. Its a fine disease. He paid and took his new baby home. Sweet Wife said of Pirate Jim, "He's so sweet. Look how he's holds his rifle. Just like a baby." I thought, 'Well heck yes, why shouldn't he.' 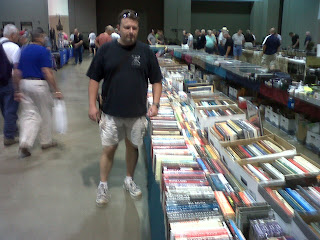 Above, Pirate Jim stands next to a display of gun culture themed books.

At one point Rebel and I came upon a display of private arms. I've noticed over the last few years dealers will proudly display 'private sale' signs on their booths. Loop holes be damned. I've also noticed their booths are knee deep in business. As we checked out this dealer's inventory Rebel spotted a nice little Revelation pump .410, the prefect little squirrel weapon. He and the dealer bickered a bit and Rebel walked away with a fine little Mossberg built shotgun. Pump .410's are fairly scarce. Revelation was a Western Auto store brand. 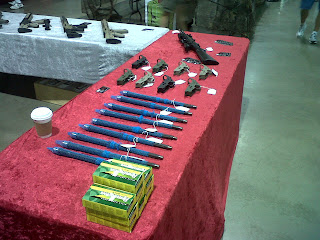 Above a display of .300 Blackout barrels and lowers. Local manufacturer. Senior Chief's next AR build.

At one point, as I filled out a 4473, Rebel walked over and asked if I wanted a piece of action in a bulk ammo can purchase. Said, yes. The dealer wanted ten dollars each. We checked each seal, stacked the cans, and smiled all afternoon. I walked away with five. 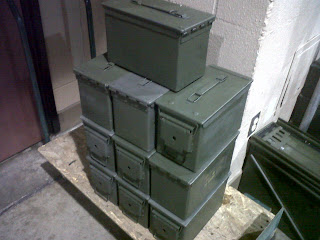 I'll take a step into dangerous territory - ready....never, ever, take your wives to a gunshow.  As I've said, I took my time to stroll up and down each aisle. I was happy...then, the women began to complain. They're hungry. Their backs hurt. Their feet were sore. I've yet to take in half the show. Guess what. 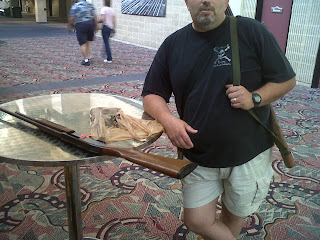 We ignored them. Above, Pirate Jim and his new baby. Displayed on the table, Rebel's .410. 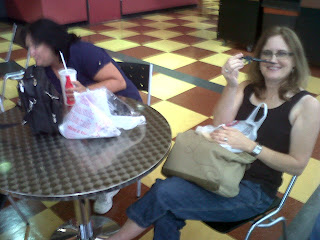 Then, the women came back and slapped us. Above, my Sweet Wife. If you look closely you'll see she has a little AR-15 ink pen, a gift to me. She's clutches other secret booty. I've found it best to hold tight to my wallet. 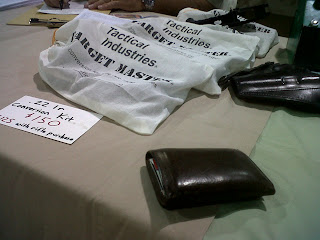 And, above, my wallet next to a sack which holds a .22 conversion kit. Notice the price.

The women finally won. The gang followed Rebel's jeep to lunch. During lunch the rain's began to fall. 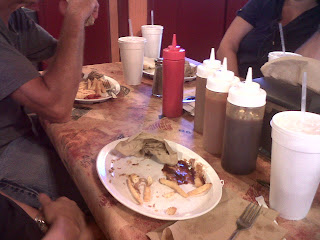 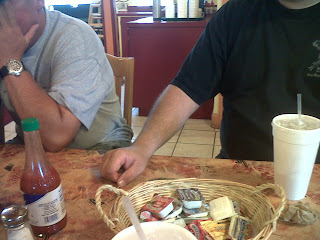