Perhaps I've mentioned this is my busy season, from now until New Year's. You've probably noticed  a drastic reduction in my post over the last few weeks - it shall continue, I afraid.

See. I'd barely finished writing the sentence above when the door bell rang....which is fine, it's money. But, those that just want to come in and chat, bug me to death. Don't get me wrong, I like them, most of my customers are nice people, the vast majority tied, in one way or the other, to the gun culture. There are the 'Fudd's' too, good folks, just one sided, and then the 'wanna-bees,' those with a wish to be hard asses but are in fact vastly unqualified to handle weapons....they give me pause, which leaves me silent while they are in my shop.

Excuse me while I pull a cup of coffee.

My son just sent me a text asking the worth of a 1929 penny. I replied, a penny. Okay, perhaps with its copper content, five cents. Give me a break. Some dude wanted to sell it to him and I know he'd pay far more than its actual worth. The boy can't afford it.

Yesterday our weather turned. In a two hour period the temperature dropped twenty degrees with high winds and rain, a steady cold rain. This morning, clear with wake up temps in the low fifties. Nice.

As you know I drive my granddaughter, Little Bit, to school each morning. We always stop for a hot breakfast. This morning a 'fake' Santa walked inside for his reindeer food.

She's giving Santa the once over; a careful study indeed.

"No, Honey, I'm afraid he isn't. He was probably hired by Santa as a temporary bell ringer for the season."

Silence. She rubs her nose. Takes a bit of her food. She keeps him in a steady gaze. Let's out a long sigh...

"Santa just needs to quit hiring the homeless, or at least makes them takes baths." 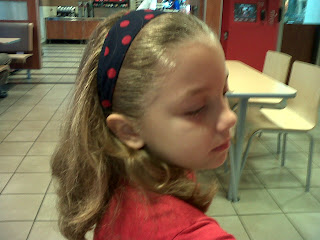 She has a point.