So This Guy Walks

Into my shop, steps aside for a moment then he asked, "Hey, is it okay if I bring a couple of items inside?"

I love it when they ask me that question.

Said, "Sure. We still live in a semi-free country."  He steps back out and walks inside with a box and two firearms wrapped in a large towel.

I take the firearms and box from him. Two rifles, both .22 caliber. I immediately sit one aside and gently take the other rifle and give it a good once over...what was it that fella said about Obama, the quiver up and down his leg thing...anyway without further ado I asked, "How much?"

As he's forming his reply I glance inside the box. It holds, along with two magazines, several boxes of vintage (to you) boxes of ammunition. Some Remington Hi-Speed .22's in short, long, and long rifle. Two boxes of Western Super-X, a couple of odd ball brands, and a partial box of paper 12 guage  #5 shot Remington shells. If you're a collector of vintage boxed ammo you know how I felt. 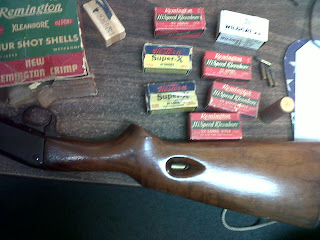 He shuffles, looks around, then said, "Well, really I need fifty bucks."

I gave him my look - all cool don't 'ya know. Said, "Listen, this rifle," and I place my hand on the H&R, "Is junk and I don't need nor want it. The bolt doesn't work correctly and its either missing the firing pin or its locked up tight. It'll need more work than its worth. Right back at me, "It's a package deal. I need to get rid of them." 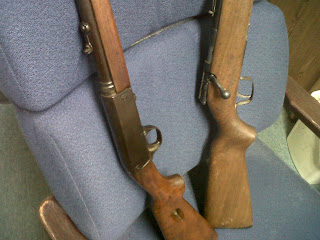 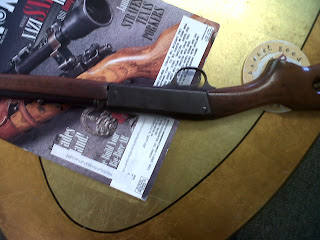 "Are you sure and firm with your price. I do like the old ammo boxes. They're kinda cute."

He said, "I understand, but yes, I want fifty dollars for all of it." 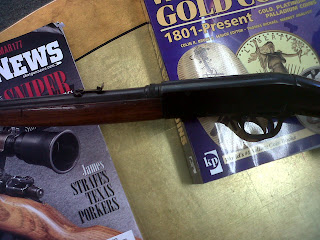