These are way cool. An easily divisible one ounce silver round.

Check it out, here. 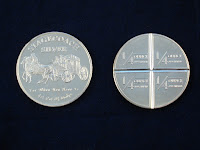 Email ThisBlogThis!Share to TwitterShare to FacebookShare to Pinterest
Labels: Silver

Gold has been somewhat choppy again this morning; coming in higher initially on a weaker dollar and then selling off on the April ISM beat, only to recover into stable territory. The yellow metal remains firmly entrenched within the broad range defined by the 1920.50 high from September 2011 and the 1522.40 low from December. Yet as my colleagues and I discussed in the latest USAGOLD VideoRoundtable, there may be reason to believe that the protracted period of consolidation may not last through the summer.

Persistent expectations that the Fed will launch additional quantitative measures may ultimately prove to be the catalyst for such a breakout. These expectations have served to put a floor under the market, protecting the low end the range. With the number of double-dipping economies in Europe on the rise, it may be just a matter of time before the entire EU is back in recession. This risks pulling the US back into recession as well, and last week's US Q1 GDP miss may be a harbinger of just such a reality.

Japan remains a mess with their economy continuing to contract. The BoJ announced additional asset purchases late last week, because the past 20-years of ZIRP and QE have proven so successful (not!) that they may as well keep going to the same well. On top of that, concerns about a hard-landing in China linger, despite some indications to the contrary.

Even commodity based economies are starting to feel the pinch. Canadian GDP for February came in at a weaker than expected -0.2%, dashing hopes for an imminent BoC rate hike. The Reserve Bank of Australia cut interest rates a larger than expected 50 bps today on rising risks to growth.

More debt. More ZIRP. More QE. More currency printing. And I'm not just talking about here in the US. I'm talking a global reality check. Everything that has taken gold from just over $300 a decade ago to more than $1900 last September is still very much going on, and may be on the verge of accelerating dramatically in the coming months. There is every reason to believe that the present consolidation is simply a pause withing the long-term trend.

Jazz In The Morning

I've jazz on the system this morning. It reminds me of the early 1960's. Nice. 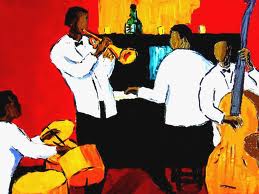 I'm trying to type and answer a text from my friend, MDR. As a matter of fact I just typed, "He has a very shallow sense of humor," speaking of our Lord in relation to my recent illness. My friend, MDR, is funny and kind and generous and I respect him very much indeed.

Which brings me to the subject of this blog post. Friends. Friends I've met in this weird and wonderful medium we all call the internet. I haven't the time, presently, to link each and everyone of you. Then again I could just take a day to write this little post and do just that, link each of you. But, I've just flipped the shop sign to open and customers hate to wait. After all, I am a wicked capitalist.

Back on subject (to much coffee this morning) you. You, my good friends, never cease to astound me. I write a simple little vignette about my restlessness and my wife's emotions and you guys come back with such caring and understanding responses it leaves me at a loss for words, literally.