How I finished dinner. I was worried I'd not have cornbread for my stew but the power came back online just in time. Guess I'll look into one of those old Coleman ovens for future blackouts. Cornbread is important don't 'ya know.

The Irish In Me

wanted an Irish stew for dinner. Ran to the market for the ingredients and now the house smells great. If you are one without patience, never mind. It takes time to build a proper Irish stew. It isn't complicated but it will burn an hour of your time.

I use a two or three pound beef roast, thinly sliced, instead of stew meat. Aside from the fact I'm frugal I believe the roast gives the best flavor.

A proper Irish stew consist of four basic parts - the beef, potatoes, onion, and carrots. If you insist dump in a few mushrooms and garlic, it won't hurt.

Coat the beef in flour and brown. Now for those of you in California you might want to find another blog because here comes the scary part....brown in bacon drippings. During the process I also use a half pound of butter, real butter. For New York City residents, that's two sticks. Brown in batches. Don't crowd the pot or you'll just steam the meat, not good. Like I said it takes time. 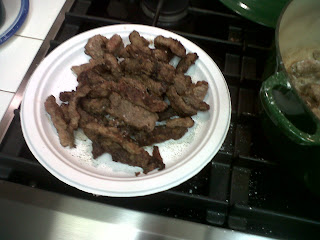 Above, the beef after its been browned. When you're finished with this process drop in the onions and cook until translucent. Add a touch of butter and beef stock and deglaze the pan. Season to taste. I also like a bit of Cajun seasoning, but that's just me. 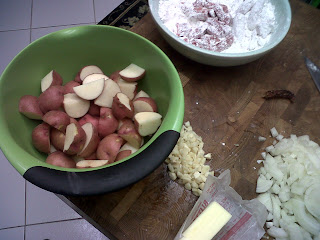 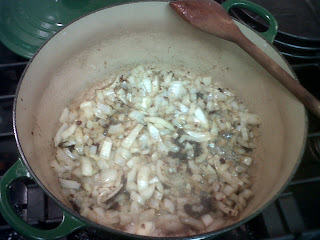 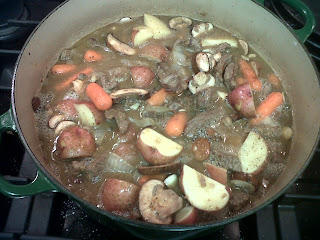 Above, all the parts happily mingled. Easy on the beef stock. You want a stew, thick, not a soup. Now, bring to a gentle boil, reduce the fire and simmer for at least six hours. Serve with a good cornbread.

To my two new friends, David and Darcy Cobb. I promise to always answer your comments. At times it can take me a few hours, days, and in rare cases longer, but rest assured I shall answer. If, for some odd reason I miss your comment let me know and I will correct my oversight.

I ask my other fine friends to please jump over and visit their blog, The Little Acre God Gave Us. I'm sure they'd appreciate the visit. 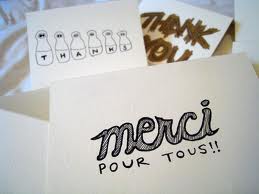 .
Again, thank you and welcome to my humble little blog. You are now among friends.

Posted by Stephen at 8:56 AM No comments:

Email ThisBlogThis!Share to TwitterShare to FacebookShare to Pinterest
Labels: Thanks and welcome to David and Darcy Cobb
Newer Posts Older Posts Home
Subscribe to: Posts (Atom)