Just An Old Pair of Boots

I'm uncertain what it was that attracted her to our travel trailer. Perhaps it was, in her little mind, a big life-sized doll house. Maybe it was the fact it was locked and not easy for her to open and play inside. Either way, she loved it.

I was never surprised when I'd hear, "Papa, can we please play in the camper?"  By 'play' she meant I'd escort her and she'd tell me what to do and when to do it. It wasn't always convenient and many days I just didn't need nor want the hassle. Never the less, I'd play.

I do not remember the last time she asked me to open the trailer - but I still remember her as she stood, pretending as she did, to cook breakfast. I was placed on the bed, just so, and given orders to not move. She stood by the stove and made pretend noise, "Whoosh,  there goes the eggs, Papa. They'll be good just like yours, Papa, but I don't have milk stuff or that green stuff like you put in yours, Papa, but you'll like my eggs cause I'm gonna scramble 'em, Papa. Papa, what's that green stuff you put in your eggs?"

Her little arms swirl and swish as she cooks and then she puts a funny smile on her face as she grabs her imaginary plates and spatula and prepares to serve Papa breakfast in bed at four in the afternoon.  With her 'meal' in hand she walks over and climbs into bed, sits and serves me. I liked her eggs. Then,
"Papa."

"See them old boots on the floor. They sure are old, and ugly. Are them your boots, Papa?"

"Yes, Honey, those are Papa's boots."

"Why don't you wear them, Papa? I bet you don't wear them because you have other boots, huh, and cause they're so ugly."

Just an old ugly pair of boots. Purchased so many, many years ago in Long Beach, California when twenty dollars was a huge sum of money and I was young and freshly married and still making adjustments to the real world. 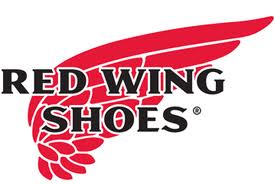 My then love and I had taken a walk. I'm sure the day was sunny, and warm as is normal for southern California, I really can't remember. I do remember the old wooden pier was just a couple blocks away when I noticed the shoe store. It was the Red Wing sign that caught my attention, the dog. An Irish Setter - a Big Red touting boots.

I was in need of boots. A good civilian pair of hunting and work boots. I asked if we could afford a nice set of boots and she replied, yes. She was sweet that way.

I look over and she's sitting with her hands in her lap, a tiny concerned lip-set to her face. "What, Sweetheart."

"Are you okay, Papa?"  I said yes. Just thinking. Then, "Papa, do you still wear those ugly boots?"

"Honey, the boots aren't ugly, they're just well used. They've traveled many miles and been worn all over the world. Papa loves those boots, Honey, and I guess I do need to oil them."

For much of the first year the boots were worn only in California. Weekends they accompanied us up into the foothills to places like Arrow Head, or our favorite, Ojai, where we'd spend time in the old bookstore located in an open air market under ancient oaks, the book shelves built for support tree to tree, and just down the street an old Indian sold fresh pine nuts from his roadside stand, and where just around the corner the hippies sold the best homemade oatmeal cookies west of the Divide.

She liked it all, too, and wherever she wanted to walk and shop I went along just to be near her side, to be able to reach over and smell her, to hold her hand. We'd been apart for so long. 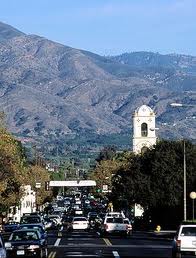 "Papa, you're ignoring me. I don't like it when you do that, Papa." I said I was sorry, and we played.

The boots were worn to other places, afterwards. They took me to Idaho on a few bird hunting trips, were scraped and scrubbed by sage and lightly ripped by rocks and brambles. A few times small drips of grouse or quail blood stained their toes but I cared less - added character.

The boots were worn on a few cross country trips. The Irish Setters stepped inside Judge Roy Bean's old store. Splashed along the Pecos river and were soaked in Mississippi mud. Once, in a fit of stupidity we took out across the sands of some Arizona desert. Two hours later they found their way back to my truck. That night in my motel room I spent quite a long time banging sand from my leather friends.

A few months later they took me to Canada where I fought huge stocked rainbow trout in the most beautiful lake I'd yet seen. Then to Alaska where God certainly finished His creations in style. They tracked Elk in fresh snow. Walked behind my old dog, Dixie, as we searched for Ruffed Grouse. My old boots liked to hunt.

"Papa, do you like them old boots more than me?"  I remember I reached and took her into my arms. She is so little. I hugged her and told her no, Papa loved her more than anything in the world. Still do.

"Then why are you looking at those ugly old boots and not playing with me?"

"Tell 'ya what. Let's step outside a moment while Papa takes a couple of pictures." She said, "Fine, but then you're playing with me. We're gonna play 'dead woman,' okay...." 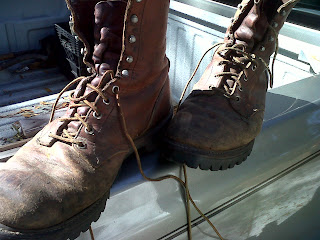 For several years the boots helped me climb Six Mile Ridge over on the eastern side of Washington State just outside Winthrop. We'd camp at a local lake where I'd rise just before dawn and pouch trout for breakfast then set out for the ridge as the cry of coyotes bounced thru the thin air. It was always cold. I'd begin my climb to the plateau and reach the top just as the sun peaked its bright light on the far horizon.

I'd take a few minutes to recover at the top. I'd place my pack and rifle aside and sit to sip coffee from my thermos. The view was wonderful. Later, on the far side of the ridge the boots would begin the descent. Two, maybe three soft steps then to stop and listen and watch. Always, we'd finish with a mule deer, quartered, and hung for our return climb.

On our way back to camp we'd stop at the old barn where one was able to drive close and reach and drop a dollar in a box and take a gallon glass jug of freshly pressed apple cider. The cider cold and sweet with bits and pieces of apple-flesh loose inside. Resistance was futile and half would be gone before we'd reach camp and the old canvas tent.

We were so young, so very young.

Not long afterwards my young wife asked if I'd take her to the Badlands. She wanted Black Hills gold. So the boots were tied and they took us to the Dakotas. That was the year we found St. Maries. Afterwards I wanted to move, lock stock and barrel, to Idaho. The boots didn't want to leave. She said no, just like that.

So, the boots walked. They strode Montana. Ambled around Rushmore. Stood silent where Custer killed his men. She got her gold, but the boots remembered and were sad. They never fully recovered. 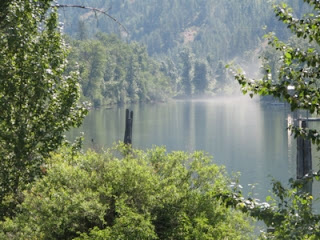 "Papa, please can we go back inside and play. Are you okay, cause you seem sad." I told her I was fine. How does one explain.

Time passed. The young wife, and a child, were lost. I wore the boots aimlessly for a few years. Then one morning I rose and made a few calls and placed my home on the market, sold my business then laced up my boots. I packed a few items, mostly firearms and books, and me and my boots drove away.

We drove without destination in mind. Sometimes for hours, or days. We'd stop and walk many paths. I can remember a rocking chair in Montana where I took a seat and propped the boots on a rail and just stared for hours at the mountains. I'd ask, 'should we stay here, or travel.' The boots wanted to leave. In Minnesota they walked away from a campground and a beautiful lady, just kicked sand on the fire and said goodbye.

The boots turned south and then west again and one morning, as they were laced, I watched rabbits nibble grass along a set of railroad tracks outside my motel in Sheridan. The evening before the boots asked me to put the handgun back into its leather. I complied. The boots were restless, so we drove east.

Days later we entered the great state of Tennessee. The nose of my truck insisted we drive further south....the boots, never at rest, wanted to go home. There is life after death. 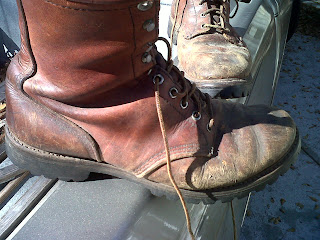 "Do you think we should oil the old boots?" She was always able to read my mind. "Yes, Honey, let me find my mink oil."

We sat and gently rubbed the oil into the old dried leather, her little hands a blur. She pushes mine away as I try to help. "I can do it, Papa. You just watch." After a few minutes she asked, "Papa, did you buy these when I was a baby?"

"No, Honey, Papa bought these boots long ago."

"Are they special, Papa?"

I thought about it for a while. Considered my answer. Then, "No, Honey. You are special. They're just a pair of old boots."

We sat them aside.

I'm sure I answered her with the same. I can't remember for sure, it was a long time ago, now. I haven't unlocked the trailer since.

The old boots sit and wait.