Depression in a Conex Container

He claimed he just wanted to stop by and say hello and that he hadn't forgotten me. He had been a long time customer and I'd almost allowed the memory of him to fade. We sat and chatted. I asked about his family and he replied, "Well, Bubba, we're okay but life isn't good for us now."

"We're living in a Conex box behind my brother-in-law's house." His BIL lived several miles away in the country and the Conex container had been his BIL's catch all - a tool and storage shed.

I'll call him Bill which isn't his real name, for obvious reasons. He's married and has two young sons and a daughter. He went on, "Lost my job, which I believe you knew," I nodded yes, "then my wife lost hers and we tried, Stephen, we really did but we just could not find work."

It was a long story and I'm sure you've heard the details many times yourselves. The bills piled high, and they cut expenses where they could; first the cable, completely cut dining out, froze the credit card, sold their second vehicle, like that. Of course my service too. Hence the reason I hadn't seen him in almost a year.

He continued, "We tried to save the house. Went months without making our mortgage payments. Made all the attempts to work with the bank. Afterwards we (and here he stood and walked towards the window and stood there silent for a moment, shame) just walked away."

What does one say in a moment of pure sadness....I remained quiet.

It's times like this when I hate my profession. I've dealt with situations like this for years. My business is open to the public and has been for thirty years. I've made thousands of friends and acquaintances. I must simply deal with it, like this day a week ago. I've heard stories that would make your hair turn gray. So sad.

I knew what he wanted. I've had it happen so many times. I've never turned anyone away. So, I asked.

"Do you need contact numbers." My Rolodex is filled. I deal with professionals from all walks of life.

He turned, held his head down, and said, "If it isn't too much trouble."

I came back into my office and flipped through my numbers. Choose a couple I felt might be of help and wrote their numbers down. Sadly, and I hate to write this, I knew it was a lost cause. The thing is I wanted to hand a bit of hope, a moment of happiness to this poor man.

He'd held his composure well. So I ventured a couple more questions. How was living in a Conex compared to an apartment? How did his children cope with the living conditions?

He explained how his BIL had cut a hole and fit a window air conditioner in its side. They had power and a few cots. His brother-in-laws' home was small as they'd also taken in his mother-in-law. Many nights the little girl slept in the house. Meals were inside the main house too. They had a portable toilet. It was awful, he said. He faked a smile and said, "But, it's only until...."

I faked a smile back. 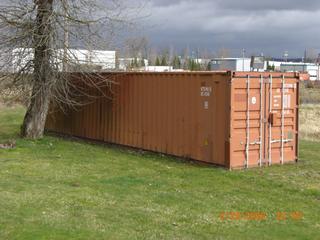 We talked for a few more minutes and I promised (and I did) I'd phone ahead and 'put in a good word.' He left in a far better frame of mind than when he walked in my shop.

I did say a quick prayer for him and his family. They're good people. Yes, I do feel they created many of their problems by living far above their income. Many do and I shall not pass judgment upon these poor people. I mean, after all, there but for the grace of our good Lord go I.