See, I'm not the only gun dude that likes to cook.
Posted by Stephen at 2:30 PM 4 comments:

Chamber Adapters for the Survivalist

I was a young man in my twenties when I first used a chamber adapter in a shotgun. I had known of them for years having seen the ads in Shotgun News and The American Rifleman, but for some reason or another had never tried one. Then one day I read a piece written by Ragnar Benson and set out to find my own.

Chamber Adapters give you the ability to employ different rifle and shotgun cartridges in certain weapon platforms. For instance; you have a single shot 12 gauge shotgun (one barrel) and you feel the need to shoot all that .308 ammunition old Uncle Bert left you when he died, and you know you're the smartest cookie at Ernie's Shoot-em-up Sporting Goods Store, you purchase a .308 chamber adapter, and you're on the way to poaching fame. 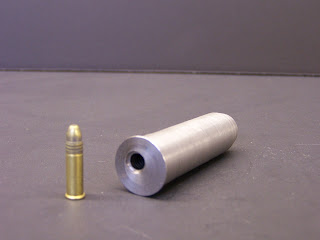 Someone once said chamber adapters (also known as Inserts) were the poor man's suppressor. They are not as quiet as a good suppressor (or as the Fudd's and Hollywood idiots refer to them, silencer)  but they do reduce the noise of a fired shot considerably. I've used .22 adapters in an old double barreled shotgun of mine for years on squirrels and I'd be hard pressed to say any good five hundred dollar suppressor could equal its performance. 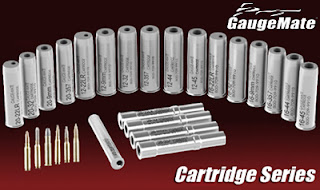 Chamber adapters have been around for many years. Marbles, the old now long gone sporting goods company, made them in the thousands. A fellow named Harry Owen made his name when he introduced the little 'Four-Tenner,' a beautiful piece of engineering that allowed one to use .410's in 12 gauge chambers.
Back before Ebay was wussyfied it was possible to find a 'four-tenner' listed for bid, but alas, those days are long gone. As of this writing Gun Broker.com has its predecessor, now made by 'Little Skeeters,' listed for bid starting at about $39.00 and up. Or you could just go to their website (Google) and purchase direct. 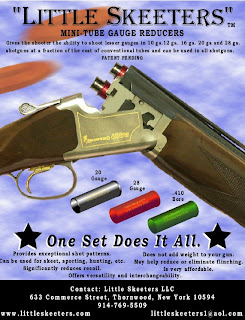 Chamber adapters have many uses. Like I said at the beginning of this post, my first experience with a chamber adapter was in the woods of Washington State while still hunting in the Olympic Mountains. I was easing through the woods on a hunt for Blue Grouse, the dumbest bird God ever created. They seldom flush unless you walk over and slap one up side its head. Anyway, that day I had the left barrel of my old Stevens double loaded with a .22 chamber insert and my right with 12 gauge birdshot.
The first covey I spotted had about fifteen birds in it, all sitting on the lower branches of a hemlock and a few surrounding rocks. They seldom flush, and if you don't believe me, just ask anyone that has ever hunted Blue Grouse. Indians used stones to kill them, serious.
I lacked accurate rock throwing skills so instead used my left barrel and sent a .22 shot at the first fat bird I could get my sights on; we're talking two plus pounds of sweet breast meat here. I barely noticed the sound. Puff, like that.
It was almost orgasmic, almost.
Shot six to seven birds before they wised up and got the hell out of Dodge. 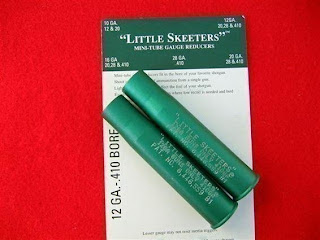 Now, without revealing much detail, I'm sure you can use your imagination and understand how chamber adapters could be utilized in the event of 'that day.'  Replace the .22 with a .357 or a .45acp, and I think you'll get the picture. A double load (or with a few differently loaded adapters in your pouch) of readiness for any situation.
Chamber adapters are also manufactured for rifles. You have .32acp for .308 & 30/06 for example. A quiet load of death indeed. Accuracy is wonderful as the adapters are rifled. It's a practical way to use all that mixed ammunition in grandma's kitchen junk drawer for practice and small game hunting.
I do recommend you place a small piece of wooden dowel in your bag for extracting (or to push) fired cases. Sometimes, but not always, the fired cases will prove to be a booger to get out. I've seldom had problems but it can happen. 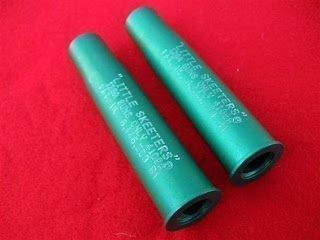 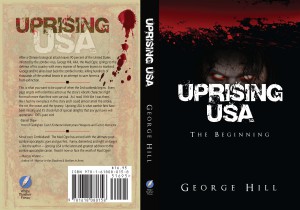 While I work on a longer post allow me to give fair warning to the soon to be published novel by George Hill of MadOgre.com fame. His blog can be found here. http://networkedblogs.com/gD0Eg.

Should be fun reading for members of the gun culture.