In our family room we have two 'built-in' bookshelves on either side of our fireplace. I have a bad habit of taking tidbits of my life and sitting them alongside the books. You know the little spaces left when you shove the books aside or rearward, leaving a nice couple of square inches of polished wood, perfect for the odd old and unopened box of Remington Hi-Speed .22, The pretty red and green of the box that gives texture and class to a protective archival wrapper of  the complete works of Alice B. Toklas ...like that.

In the quiet of last evening I glanced from my comfortable chair up at the bookshelves in an attempt to find some volume or the other that had recently been tossed about in my mind; I believe it was a rare bio of Hetty Green, the witch of wall street. Anyway I became distracted when my attention was caught by one of my odd dust catchers; a vintage (not old, just kinda old) Heddon spinning reel. A model 220-R. I stood and reached and sat to caress the fine lines of this reel - actually I stroked memories of my youth.

Heddon is long gone, oh sure, the product line of fishing lures is still owned by some strange corporate body, but the essence, the history of Heddon has long vanished.

When I was young, a knot-kneed kid of twelve or so, I had three interests in life - guns, books, and fishing. Just your typical country boy. I can remember countless hours of intense study with a Heddon catalog tucked under my bed clothes where I'd dream by flashlight of a mailbox filled with Lucky 13's and River Runts. 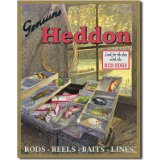 Across the road from our home, at that time, was a cattle pasture. Located within was a beautiful old pond of some several acres. The lake held an island always just out of my reach as I had no boat. My time and fishing was limited to the shoreline, but I was content with the limits, happy even for the freedom of a day with nature.

I'd always wake early on weekends. I'd grab a quick breakfast of whatever and then outdoors to dig a can of worms for 'just in case.' Just in case was my backup to the three or four odd lures I was allowed by my father or purchased with birthday money. Those lures (or as I referred to them, plugs) were precious jewels decorated, as they were, with shiny silver propellers fore and aft. Painted in shades of gold and yellow or a washed out green with black spots - for me, art.

I'd go armed for combat with my battered steel rod loaded with its very old spin-cast reel. Not trusting its worthiness it was usually accompanied by a six foot cane pole; I intended to catch - something.

In those early morning hours with the rising sun warm on my back, I'd crawl under the house and retrieve my stash of gear and head out with fresh dew cool on my bare feet. A scrawny tow-headed kid with the ability to slip between barbed wire without leaving a trace of his passage. 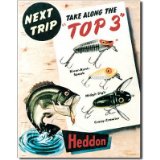 I had no mentor. I fished purely by instinct.

My father was 'the game warden,' as the locals called him and as such I was to be feared. The locals kept all fish regardless of size so they were uneasy of me and took efforts to stay out of sight and refused to fish with me. Thus, the small lake was usually mine alone, my private world. This suited me just fine. I was a quiet kid and company talked and I was sure every Bass in the pond could hear them which would spoil my chances of a good catch. Bream, on the other hand, were just stupid, I left them as a backup.

I'd work the pond from one end to other, and I almost always caught fish. Most were three and four pound Bass with the occasional ten, and once, a twelve pounder which caused me to drop all and run, screaming like a banshee, all the way home to show my mother. Proud, I was.... 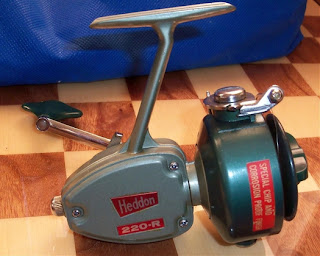 The snapshot of the memory taken that long ago morning has been lost to time. I wish I still held the evidence, I'd like to see if there was a mile long grin on my childish face, if I held the Bass close or at arms length, but mostly I want to see, just one more time, that old rod and reel. If memory serves me the reel was a Shakespeare. But the years since haven't been kind to my recollection.

I do remember days of summer sunshine, the odors of cow pies, tiny piles of rabbit scat, raccoon tracts pressed into the mud, the way the water lilies held close to the shore with their white waxy blooms kissed with just a touch of yellow. I still remember the cattle, tails swishing flies, heavy milk filled udders that flapped when they walked. I remember the morning I became distracted by Crawfish hunting, a tin can of boiling water and the way those mudbugs tasted afterwards.  And, I vividly recall the tall dull green bulrushes, and the quick hard thunderstorms that had a habit of catching me mid-cast, and I, too hard headed to seek cover forced to walk home soaked as a drowned rat. And the water, I remember the water most of all. 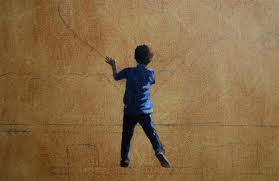 Norman McClean once wrote in his novel, A River Runs Through It, a simple passage - 'I'm haunted by waters.' The moment I read his words I fully understood their meaning.
Posted by Stephen at 11:01 AM 16 comments: