We arrived to a brisk cool wind and gray skies. Perfect weather for a day at the old farm. Pirate Jim and I arrived first and the first course of action was to build a fire. I wore a heavy black hooded sweatshirt and still the chill seemed bone deep. Out with the lighter.

So, I made a small campfire. Thankfully Pirate Jim had thermos of good hot coffee. 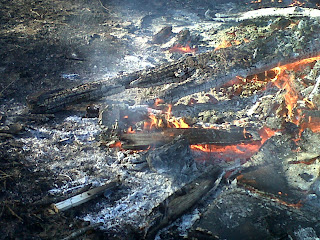 Our plan of the day was simple. Finish a bit of light construction on our 'shooting shed.' Remember the flood of last July had taken our shed, and well, slapped that sucker to the ground. We've since improved the shelter, enlarged it and now it needed shooting benches and gear tables. After, we'd spend the rest of the day on the firing line. 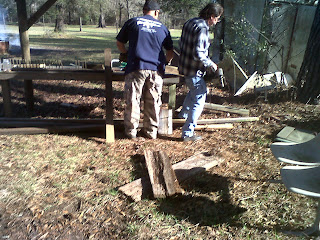 When the rest of the crew arrived we stood around the fire and chewed the fat. We had a good long heated (all agreed on the issue) debate about gun control and the actions of the fools in our nation's capital. Then we set to work. Above Senior and our resident hippy, Rebel, as they measure and cut lumber.

When six men work in harmony it doesn't take long to finish a task. We used scrape lumber salvaged from the old structure and from long discarded piles left at the farm and before long the yell, 'the range is hot,' was accompanied by live fire. It felt so damn good.

In this next picture notice the pair of legs just beyond the open ammo can. The ammo can belongs to me and is filled with nine millimeter Luger...the open puke green range bag and legs belong to my friend, Duke. Keep your eyes on the range bag....I had plans. 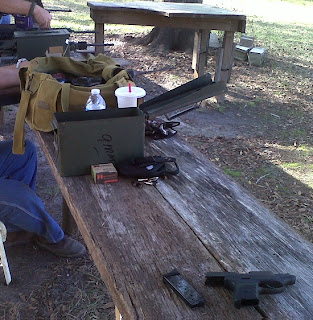 We intend to cover the two boards, our new bench rest, soon. The Ruger LC9 is my new, and very inexpensive, baby and she was put through her paces. She functioned very well indeed. 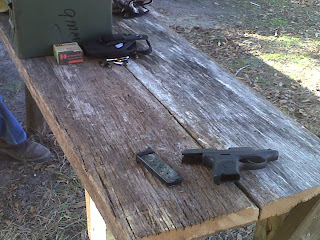 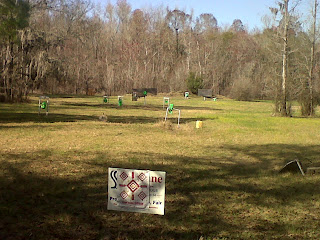 Above, as the men worked, Senior and Pirate Jim took it upon themselves to paint target stands on the range. According to them they 'zombiefied' the range. Our long term goals for the range are to build stations for combat shoots. Between continued improvements on the Boar's Nest and the range we have a heavy workload. (I used the word, range, four times. Shameful.)

Below, a random selection from my gun safe. Even though it hurt I ran thirty rounds of 5.56 (yes, I own many evil thirty rounds mags) thru her. Oh, the pain. With every shot I kept a tally of cost. Still, it sure was fun. 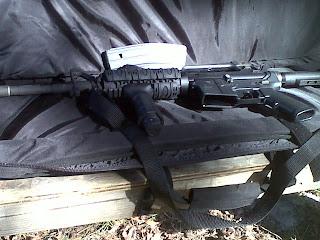 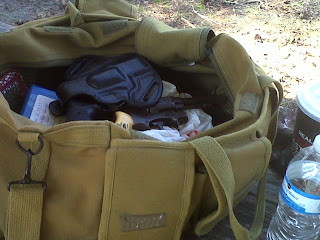 Now, notice how its stocks are visible above the rim of the bag. As MLK said, I have a dream. 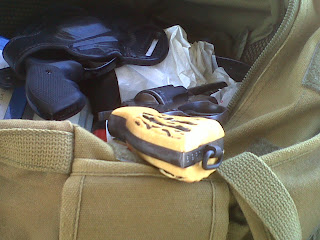 Duke is easily distracted. One can point towards a rare bird or offer him a bottle of water or ask him a question, and poof, he's deep into a fog.

Notice how the Smith has worked its way to my side of the bench. The ammo can gives concealment. Step two was a complete success. Sorry for the blurry picture but I was, you understand, in a hurry. 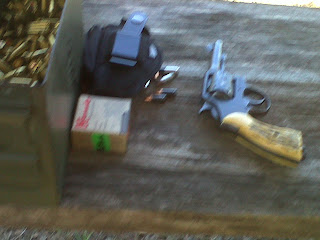 In the meantime, Senior prepares his Ruger 10/22 for a workout. He has a tendency to 'tactical the heck' out of his firearms. You should see his childhood Red Rider. It has a light and siren. Thing is, his stuff works. The purple velvet bag belongs to Pirate Jim. He slurs his speech. But, that's fine. He's also our medic and a damn good one. He'll hit you square between the eyes at four hundred yards then save your life. 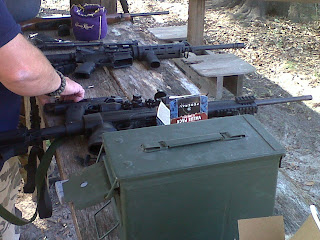 This next shot is of ShooterSteve's station. He's far too alert for one to gather needed items. 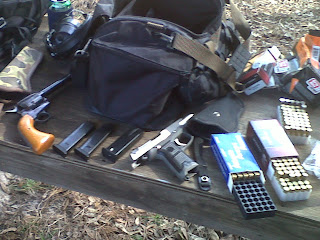 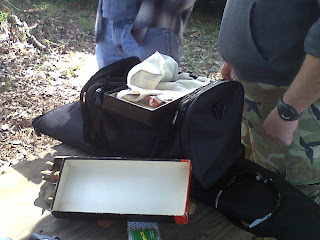 Just a box of ammunition. For those of you new to the gun culture guess its purpose. 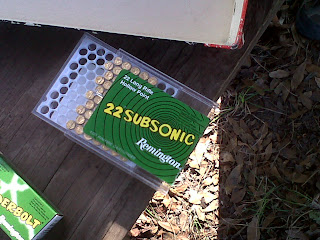 Duke's Ruger...isn't it pretty. Yes, its blue is worn, but it has the patina of grace which makes it a beautiful piece of history. 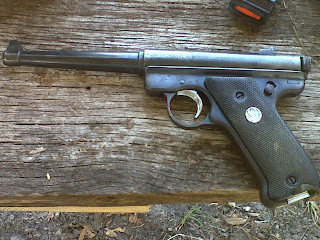 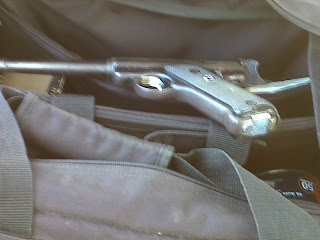 He's so easy. Once, when his back was turned I used forefinger and thumb to pinch a couple of extra 1911 mags. Don't tell him... 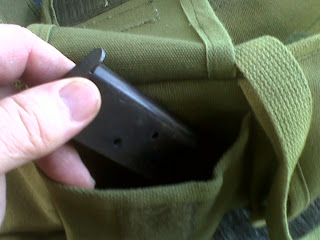 (boys and girls, I do not recommend you pinch items from range bags when the owners of said bags hold fully loaded rifles and handguns. Wait until they reload. The above demonstration is for training purposes only.)

Once again I have the honor of extending a big warm thanks and welcome to a new friend and fellow blogger, Garland Girl. GG writes the blog, Crap Happens Acres.

My new friend I promise to always answer your comments. If my big toe itches and distracts me my reply could take several hours or even, in rare circumstances, days. But be assured I shall respond. Again, thank you so very much and welcome. You are now among friends.