Because it seems I'll miss season three of The Walking Dead on AMC. Seems Dish Network, my satellite provider has its panties in a knot over AMC's add asking Dish customers to drop the Dish Network. It's nothing more than a fight over fees. 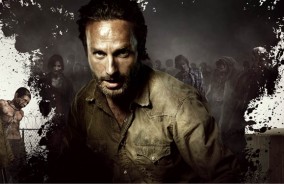 Shucks. I like zombie movies and this was a good one. Guess I'll wait and watch it on DVD. If I didn't hate cable so much I'd cancel Dish.

Yesterday was a very long and hot and sweaty day. Our group spent all of Saturday at the farm in the recovery efforts of our Boar's Nest and outbuildings. To say it was mess would be an understatement.

I did not take pictures. Didn't have the time or heart. We lost much but nothing that cannot be replaced, and best of all the building itself was not damaged. It was wet, but by the time we shut down operations had dried considerably.

When we first opened the 'Nest we found mold growth on almost every surface. Our lower kitchen cabinets were lost - particle board doesn't like water. The upper cabinets were safe. Thankfully, all my lanterns had been placed atop and survived the flood. As I type my three piece and very expensive sleeping bag is tumbling in our dryer. It came through with flying colors.

We lost the newly installed insulation and other new building materials but overall we were lucky, and have taken this flood as a great lesson for 'that day.'

The storage trailer, an old Air Stream, well, that was a different story. We lost almost all its contents. Stored food not in sealed containers, paper products all gone. All the properly stored rice and beans within mylar bags and sealed inside five gallon buckets with proper lids were fine - dry as old bones.

I lost nine plus thousand rounds of ammunition. Well, it wasn't truly lost but I'll explain in a moment.

Much of my ammo was fine. Thank the Lord I only prepositioned, in the trailer, a fraction of my ammunition.

The flood waters took our outhouse for a ride. It moved the one hole library from its normal location and took it for a several hundred yard ride and placed it against a fence. 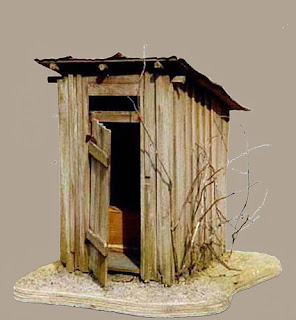 We have a huge picnic table at the Boar's Nest. It was custom built by our nearby city government for its employees and donated to us. (thanks, Duke) A very large and heavy table, mind you. We had the picnic table placed on the west side, or behind the Nest. The flood waters picked that sucker up and moved it through a small gap between two buildings and deposited that heavy object on the east side of the Nest. The table was upside against another fence. Incredible. It took six grown men and Senior's Honda four wheeler to move it back into position. Think about it....

Now, back to the ammo.

Much of my stored prep ammunition, is 7.62x51 surplus. It is sealed within battle packs, a rubberized package, and locked inside ammo cans. The ammo cans which hold this ammunition are not water tight but this is not a concern as long as the rounds stay inside the sealed battle packs. The ammunition is South African military surplus - good stuff. Stand-by and I'll find you a picture.. 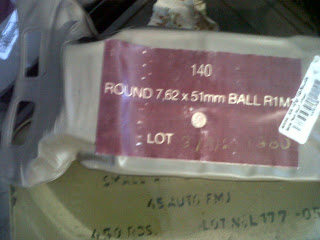 Its a little blurry but, no pun intended, you get the picture. The date is faded but if you look closely you are able see the date, 1980, on the bottom right corner. Its shoots like a dream. The sealed can underneath is .45 ACP. Both the South African and sealed tin of .45 came through the flood without problems. You should take notes....

By the way, all these pictures were taken this morning out in my garage.

I did not lose a single round of 7.62x51. The 7.62x39 and 9x19 were a different story, and it's my own fault. You see back when I loaded all this ammunition for prepositioning I didn't have enough ammo cans to properly store my precious cargo. I had over nine thousand rounds left homeless but for the, supposedly, sealed plastic bags in which it was shipped. I thought, what 'da heck I'll take it anyway. That was a big mistake. See for yourself. 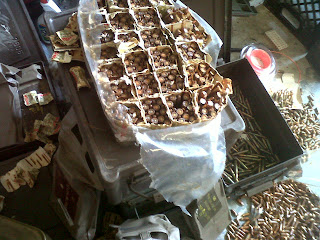 Above - see the pile atop the can. That's one thousand two hundred rounds of nine mil. I've ripped open its plastic bag and drained the water. I also removed the top of each box to allow it to air dry inside my garage.

It's important that you know I shall not throw these thousand plus rounds away. The ammo is Russian. To reduce their cost the Russians use steel casings. Steel, as you are aware, will rust when it is submerged for hours in muddy river water. Even if two out of ten rounds fire, I'll keep it. The Russians also claim they seal their primers....don't believe them. I'll explain later. 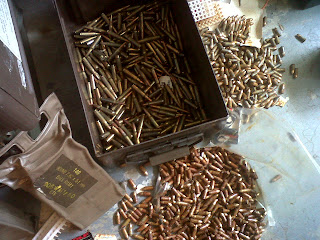 In the above picture the pile below the ammo box is another twelve hundred rounds of 9x19 Tula loaded steel cased ammo. To the left is a battle pack of South African thirty caliber food for my M1A. 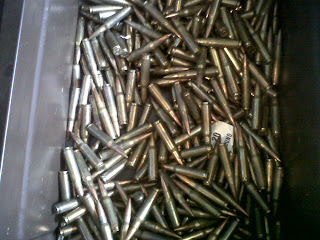 As an example of properly cased ammo here we have the only loose 7.62x51 surplus ammo that rode the flood outside its package. It's fine. These primers are sealed. Once dried it will kick butt all day. 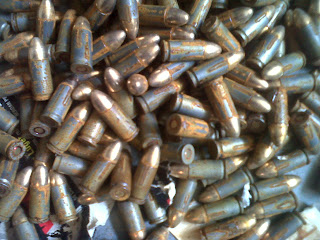 Above, here's a close-up of the nine mil. Notice the rust. I took each box and ripped off the cardboard boxes. You can see the bits and pieces of packaging mixed within the rounds. Yes, its Wolf. Great object lesson...if you store Russian ammo, place it inside nice tight clean ammo cans.  Just take care to check the gasket and make sure each can seals tight. 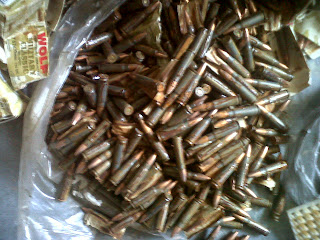 Again, sorry for this blurry image. Above, 7.62x39 fodder for my AK's and SKS rifles. Rusty reminders to never ever store ammunition, for survival purposes, on or near a flood zone without first taking all precautions to insure it stays nice and dry. Notice the rust only took a few hours to form. By morning the rounds were dry. 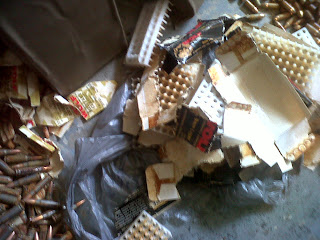 Here's the pile of discarded packaging torn from the individual boxes. This pile is the 9x19 Wolf brand. Note the plastic round separators. Even though each package came within a sealed plastic bag the flood water, once inside the storage trailer, lifted its other contents and shifted the load. This shifting, not unlike a standard washing machine ripped each bag. When I took the packages outside I had to dump a liter or more of water from each bag. It was heart breaking. Take those notes. 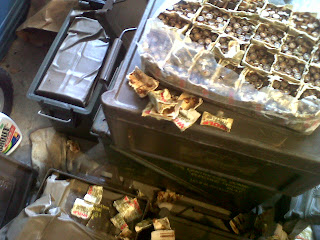 See the box to the left of center....its one of those silly hard plastic boxes from Cheaper Than Dirt. I believe it came with an order of ammo I made years ago. Can't remember. Anyway....they are not air or water tight. When I opened this box it held a good two liters of water. Thank the Good Lord I had sealed battle packs inside or I'd of lost any loose ammo stored within....don't use them for ammunition storage unless you plan to leave it inside out of the weather. 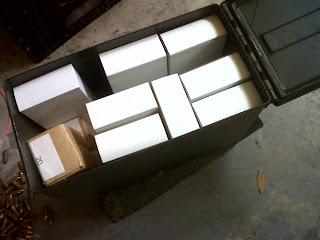 Above, here is an example of a properly sealed can of ammunition. This happens to be several hundred rounds of AP. Black tip 7.62x51. I once upon a time came across a few hundred rounds of surplus World War 2, 30/06 belt loaded rounds. Thanks, Dad. I pulled each bullet. The black tips were to priceless to waste and reloaded each gem for my M1A. To the side of the white boxes you'll notice two spare boxes of South African. When opened the can was as dry as a desert well. The box, I'm sure, floated. 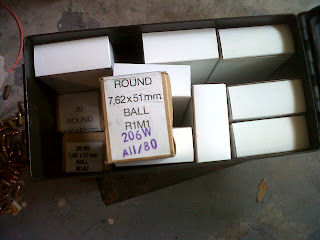 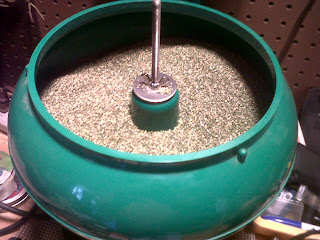 By now I'm sure you've asked, "Well, Stephen, what are your plans for this ruined nine plus thousand rounds of ammunition.?" Good question. See above picture. I repeat, I will not throw this valuable resource in the trash. I shall clean each piece, and trust me, it'll take me a while, months even to clean each round.

Yesterday, after we had unloaded the mess from the trailer,  I believe it was my good friend and fellow group member, Duke,  that asked if we thought it would still fire. Since Pirate Jim had an SKS in his truck Duke asked to barrow it and loaded seven rounds. Seven very wet and rusty rounds, and pulled the trigger. Only two out of the seven fired.

Remember when I said, 'they claim to seal their primers.' Well, there is your proof. Yes, Tula may indeed seal the primers, but as in all manufacturing processes, quality control makes all the difference.

So, my answer is, the ammo, after a good cleaning, shall become trade fodder. I'm certain when the SHTF there will be many pilgrims out there in need of ammunition. It's important to understand I'd never trade a single faulty round of ammo to any person when it could possibly cost them their lives. I would instead explain to them that perhaps one or two out of ten rounds will not fire. But, when you are out of ammunition, a two in ten chance of feeding your family is better than no chance at all. 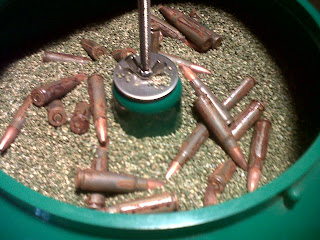 The rusty rounds loaded for a long bath.

It's time for me to order a dozen new ammo cans. I also now have an excuse to begin the long process of restocking my ammunition supplies.

Please, learn from my mistakes.