I hear the wind whisper. The small palm, just outside my office window, gently scrapes it fronds against the screen and it's an eerie sound, yet soothing. The shop is quiet. Swear I just heard a mouse fart.

Sorry for the long absence. No excuses. I just needed a break. As many of you know firearms are my first love - as far as a hobby, but if push came to shove books might edge out firearms. I've taken the last few days, in between chores at home, to read. Once I've taken the dive into a books pages I often find myself lost to all other distractions, and as a result, the blog suffers.

The mood around my home has suffered too. Tomorrow is her birthday. She'll turn eight. We've missed nine (almost ten) months of her seventh year. Yesterday we tried to shop for her birthday. Notice I wrote, tried. We have little information towards likes, dislikes, sizes, needs. Has she outgrown certain toys. Has her taste in dress changed over the last few months. Her foot size is now a mystery to us. And, the most important question of all - does she still care about us.

Influence, if applied directly and with enough force can indeed alter young minds.

With the above in mind, we shopped. She owns a gameboy (at least I believe its called a gameboy) so if she's allowed to accept our gifts she'll have two new games, and other little bits and pieces selected by her Nana. I purchased her a few age appropriate books.

(Edit: Sweet Wife insisted I correct 'gameboy' to 'DS.' Done...now perhaps she'll get off my back.)

It's been a dark weekend. 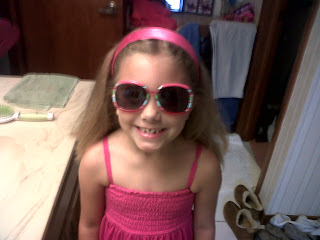 Yesterday I cleaned a closet in my home office. You know you own 'too' many guns when you find six firearms stuffed far back in a closet (covered and blocked from view) you've forgotten. I swear on all that is Holy.

After I'd removed the first layer of junk I had just enough room to step inside the closet. Six bags of old Christmas paper, scrapes mostly, later and I was able to reach the right side shelves. I spotted a green handgun case. Inside I found an old revolver. I stood there like an idiot, mouth wide open, thinking, 'what 'da heck.'

I also found five long guns. Two or three shotguns and two rifles. I think. One an SKS Albanian. Go figure. Near the back of the closet I found two rather large pieces of art Sweet Wife had stashed. I moved them and behind I stumbled across five full boxes of Estate 12 gauge double ought buckshot, and twenty-five AR magazines, fully loaded. The magazines were a mixture of twenty and thirty rounders. 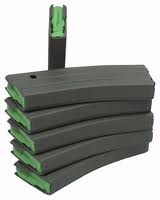 I will not mention the other treasures, like for instance the M1A magazines, or the box of surplus ruck sacks, or web gear, stripper clips nor the fifteen or so rifle cases. If I were to mention the long lost items it might make me appear to be somewhat scattered brained - and you know that isn't true. 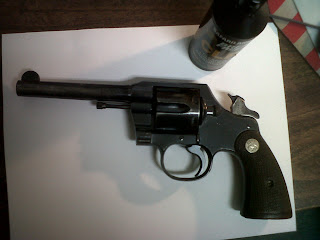 walked into my shop last week. I took her home. The man wanted forty dollars for her. The graceful old lady is safely tucked inside my safe. She's happy.

I shall wring her out next weekend.