Amidst riots in central Europe that have now spread to London and a debt downgrade that threatens to plunge the United States into a double-dip recession, Americans’ lack of confidence in their leadership is so fervent that they are now “pre-revolutionary,” according to pollster Pat Caddell.
A new Rasmussen poll shows that just 17 per cent of Americans believe that the U.S. government has the consent of the governed, an all time low. This dovetails with a record low for Congress’ approval rating, which stands at a paltry 6 per cent, while 46 per cent of Americans think most members of Congress are corrupt, with just 29% believing otherwise. 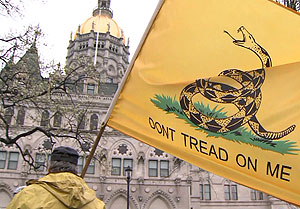 My inner beast believes our country should take Mr. Jefferson's advice. "That government is best which governs the least, because its people discipline themselves."

Stephen
Posted by Stephen at 8:40 AM