Let's Chat, Shall We

My father and my grandfather before him taught me a man's word should never be broken, and when a man shakes your hand on a deal, he's just given his word of honor and the deal is sealed.

A couple of hundred years ago a deal was sealed by both parties with spit in hand and a firm manly shake, and then as, Al Swearengen said in the movie, Deadwood, "I spit in my hand, will this give you the vapors...." it's too friggin late to back out and maintain your dignity.

A few days back a fella came into the shop and asked if I'd like to purchase four firearms. Said he had problems and needed to raise a bit of quick cash. I took two, told him to take one home as it wasn't priced in my range, and the fourth I requested he leave overnight as I might know of a buyer. He agreed.

The fourth firearm was a Ruger Super Redhawk chambered in .454 Casull/.45 Colt. Nice handgun but not to my liking and his asking price was far out of my range - read, little margin for profit. I cannot afford to have cash tied to a piece that I know will sit and gather dust for months. So, I zipped out a text to Duke. 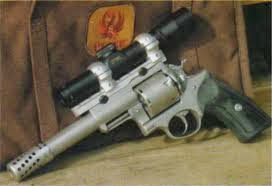 This handgun, and trust me, its a fist full of manly boom-boom, isn't your everyday target pistol. Its primary purpose is hunting. Alaskans holster them for Grizzly protection. It isn't designed for normal tuck 'em under the shirt self-defense. When this baby is filled with the .454 Casull, her recoil will hurt the novice and make liberals in surrounding counties faint. She's a California democrat's worst nightmare. Now ease a few .45 Colt's down her gullet and she'll purr like a kitten. (The recoil is greatly reduced. Or, as a Fudd would say, "It don't kick so hard.")

Duke returned my call and said he'd love to hold her. He arrives and takes the nice little Redhawk and gives her stocks a squeeze. He shed a tear. They then whisper sweet nothings each to the other and he said if the seller lowers his asking price he'd take her home...but only because he hand rolls his own .45 Colt ammunition. I jump on the phone to the seller. 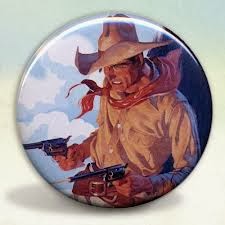 As Duke sits and waits the seller and I chat about his price. He wants six hundred. Duke offers four. The seller balks. I'm the broker, the go between...me, "Duke wants to know if you have ammo." The seller said yes he did but mostly .45 Colt with a partial box of .454 Casull. I explain his asking price is too high. Said if one were to add a hundred or so to the price a new in the box current model was but an order away.

Finally the seller counters with, "I'll take four-fifty, not a penny less." Duke replied, "Ask if he'll throw in the ammo, all the ammo. If so, we have a deal."

Over the phone I give the seller Duke's offer. The man said, "Yes." I tell Duke, "Yes." Verbal handshake. Done deal.

All parties agreed to meet here the next morning. I held and secured the weapon overnight. Duke went home with a smile on his face.

The next morning I placed the Super Redhawk on my desk and within an hour after I'd unlocked my front door Duke arrived. We waited. Waited some more. The seller finally called and said he'd be here within the hour. Still we waited. Soon the guy is an hour overdue. Overwhelmed with impatience,  Duke drives home. I held his funds.

Like a skunk from its winter den the seller calls, all sly like, "I'll be there soon." Nothing else. I quickly ring Duke and tell him to return. They arrive together and walk back to my office. When this man, the seller, by the name of Keith Nobody, walks into my office I instantly knew something was off, wrong, not good. He begins with, "I'm so sorry guys but I just can't do it. I can't sell at this price. The deal is off."

Without emotion Duke bends and takes his cash from me and places it into his pocket. The skunk takes the handgun and wisely retreats. I look at my friend and say how sorry I am about his man's lack of class. Duke smiled, ever the gentleman, and said it wasn't my fault. 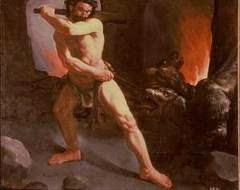 Still. And, here I give my word to my friend. I'll never again purchase a firearm from this man. I don't care if the butthole starves to death.

I hope Duke remembered to wash his hands.