She said, "It's time for you to blog. You're lazy and it isn't fair to your followers."

I said, "Heh," or something similar.

I stood in the kitchen and continued my corn and shrimp chowder, and let me tell 'ya, it smells so friggin good. She stood nearby and repeated herself. Then, "Post about your chowder."

So much for my book vacation.

My plans were to take a few days off, which I've done, and try and make a dent in my 'to read list.' At present I'm knee deep into The Lost Years by Barry Broadfoot. Highly recommended.

So there, my current state of affairs is loaded to the side of peace filled with easy music, books, and a nice pot of fresh corn and shrimp chowder. If the mood strikes I may move my watch back an hour tonight....or not. 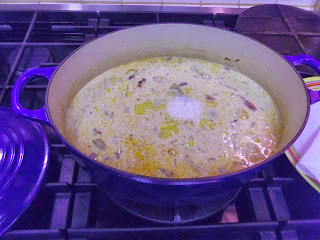 Kinda blue, isn't it....the shrimp is added about fifteen minutes prior to serving. Chop about a cup of fresh arugula and sprinkle when served. If enough interest is generated I will take the time and write out the recipe....its locked away somewhere way back in the dark dank interior of my mind.