If You Say So

The woman entered the market just steps ahead of me. She was short had close cropped hair, and as it turned out, an attitude. Wasn't a doubt in my mind she lived on bean sprouts and owned six cats and her means of transportation was a recumbent bicycle with an Obama sticker affixed to its rear fender. She sported low cut Chuck Conner's, pink. The type that probably cruised dark allies in her spare time to fed crusty filth encrusted rats because the poor little things didn't have health care or medicaid.

You know how it works...when strangers hit the market about the same time as you and then you continuously bump carts on the same isles. With each pass she'd give me a look of total disgust. Finally, in the meat department I'd had enough. I looked her straight in the face and said, "Do I know you?"

"I hope the hell not. You're the most fearsome creature I've seen in weeks." Fearsome, she said...

Caught me by surprise that did, but I held my composure and came back with a sharp off the cuff, "Excuse me," then glanced around, kinda embarrassed.

"You look like one of those ultra-conservative militant militia types that want to destroy our government."

Now, here I am in my standard attire, a simple black t-shirt, 5.11 pants, dark blue cover shirt and boots, and my hat. Nothing, I believe, scary. What was it about me that gave her the impression I wanted to destroy the government. I was certain my carry piece didn't print. I haven't fired a weapon all day so it couldn't be the odor of powder residue. My knife was secure and in its place. I was certain I'd left my militia 'assault style' rifle in the truck...so what gives here.

I recovered, bent at the waste so I could hover over her little patchouli butt, and whispered, "I am." 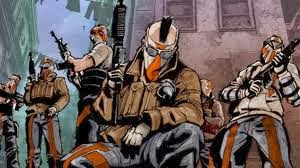 The look on her face was priceless.

I walked out with a smile. Felt like a kid with his first peppermint stick.