I rest my weary feet upon an antique. Just an old foot stool we purchased about thirty years ago; a aged piece of furniture with its history reflected in scratches and torn fabric. After a very expensive trip to the local upholsterer, it and its matching chair are now my boon companions.

When the newly recovered stool was delivered I discovered it had a nice storage space beneath its cap. It collects my bits and pieces, or junk, as described by the wife. 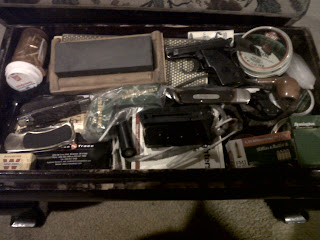 Over the years I've stashed odd knives, pipes, various magazines, whetstones, diamond sharpeners, long unused Zippo lighters, a single chamber adapter loaded with a single .45 round, a coil of 550 cord, two laser sights, and various amounts of random caliber ammunition. There's even two cans of mink oil and an emergency candle. There is a small Beretta tucked inside just in case some critter decides to commit suicide.

All this to say - I need to organize my stuff. Sweet Wife should arrive home soon and I'm worried. She gave me instructions to sort and discard the excess as its too heavy for her to move around when she cleans. She further instructed the job should be completed before she arrives home. She did so as she tapped her toe....that's, serious.

Email ThisBlogThis!Share to TwitterShare to FacebookShare to Pinterest
Labels: Hoarder, junk in the trunk