Well, Perhaps To A Fudd

that Colorado idiots ammunition supply was 'mind boggling' but to a shooter he was nothing more than a slacker, or a Fudd.

Just read the following headline on the Drudge Report:

Sure, they're people that believe a twenty or fifty round box of ammunition is sufficient for their lifestyle. Hunters just prior to buck season, that will head to the range and fire three rounds and call it good. Then climb their tree stands, and if they're lucky, get a shot off climb down and yell, "See you next season, Mr. Buck." For a Fudd a twenty round box of thirty-thirty could conceivably last them the rest of their lives. 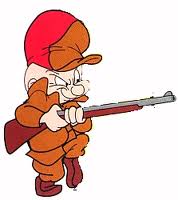 I believe the news media printed he had six thousand rounds. To a shooter, like me or my friends, six thousand rounds makes you a slacker. I'm sure some liberal weenie just read the last line and has her thong in a bunch, but I don't give a damn. Six thousand rounds says to me you're goofing off. I can hit the range and fire Mr. Fudd's fifty round box in under thirty seconds.

Guess what, I too have purchased from BulkAmmo.com, wonder if this makes me a criminal too. I guess the lib's next target will be to slap bans and regulate access to our on-line ammunition purchases. They'll try at least.

I said, even made a vow, I'd not get into this debate, and here I've made a liar of myself.

The guy's mind is twisted, he's sick. It's not the amount of ammunition you own that makes you a walking zombie with a desire to kill, it's those little voices inside your mind. Seek help.