To be published this September:

To explain: "Founders" is the second sequel to "Patriots: A Novel of Survival in the Coming Collapse". It is set contemporaneously to the first two novels, but in different geography, with some crossover characters. This novel details the epic cross-country trek of Ken and Terry Layton that was just briefly described in "Patriots". There are also storylines at Malmstrom Air Force Base, Montana, and in the vicinity of Fort Knox, Kentucky. 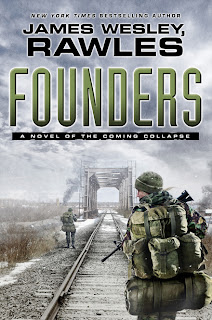 A link to Survivalblog is located at the upper right of my blog page.

Stephen
Posted by Stephen at 5:00 PM