I was party to a fascinating sight yesterday.

My morning began with a trip to my son's home where Sweet Wife and me helped our son and daughter-in-law with a few minor home repairs. No big deal. I spent much of that time outside in temperatures which were well above 100 degrees....I was nothing less than a sweat rag.

On our return trip Sweet Wife and Little Bit (she came along for the afternoon) ordered me to stop at the local Diary Queen. I said no, I'm wet and want to go home. While sitting in the Dairy Queen parking lot, which is located in front of a Salvation Army store, I noticed a car drive by several times, park as the engine idled, then peel out and come to a quick stop at the donation trailer. The driver then quick like a fox jumped from his car, snatched a garbage bag bundle, threw it into his car and drive away. Weird, said I.

Until I noticed another truck do much the same. My camera came out. In the span of less than ten minutes I counted no less than twenty cars and truck jokey for position at the donation pile. This pile was huge. The thieves whittled that sucker down to nothing while I waited on my milkshake. One man, in a green stripped shirt, made six runs on the loot. Some cars would wait six to ten yards away while another man or woman had their turn at the donations.

Only two cars, as I waited, actually dropped off donations; one at the curb, the other at the pile stacked at the foot of the trailer. The thieves had the loot in their vehicles before the donors even had a chance to drive away.  Folks, it was fascinating to watch. 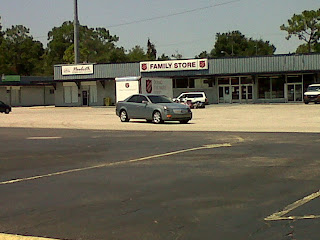 Above, democritter drives away with his loot as another takes his place at the pile. The flea market awaits. 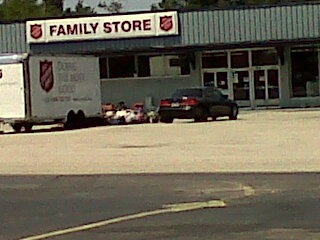 Green shirt man's second or third trip to the booty pile. This is a Sunday, the store is closed. 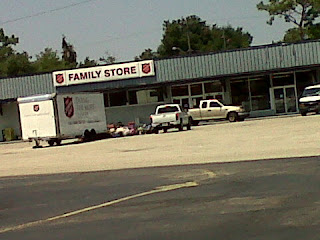 The truck parked next the door of the building is a donor. Seconds after I snapped this picture, the smaller white truck moved in and grabbed the pile. My wife later said she thought perhaps these poor people were taking items for their family. I argued the selections of the criminals, the speed of the snatch, indiscriminate and blindly loaded objects, was nothing more than looting for the purpose of resell.

Granted, we all suffer from this mini-depression. I should not pass judgement. Perhaps these donations, even though placed after hours before the donation trailer, should be considered discards and labeled public domain, free for the taking. Yet, these people used stealth and were quickly in and out, which indicates to me they were guilty of their actions. You tell me.

Still, I laughed, and I've learned a valuable lesson. Always donate when the store is open for business.

Footnote: this morning I passed this same establishment and all, all, of the pile has disappeared. The store had yet to open.

Stephen
Posted by Stephen at 2:00 PM