When I arrived there was but one space available at the far side of the parking lot, a convenient slot next to a dumpster. I stepped from my truck into the hundred degree furnace. The odors from the restaurant waste slapped me square in the face. Awful stuff.

My mission was to have a blood test, a doctor ordered waste of my time. I began the long walk to the far side of the tarmac. Halfway across the parking lot I stopped and composed myself, muttered, "Don't limp," and opened the door to the building. The waiting room was packed, stuffed full of democritters; the elderly, children, illegal immigrants, seniors in wheelchairs...all of 'em with a cell phone chattering ninety miles a minute.

I felt like a marshmallow in a chocolate factory. 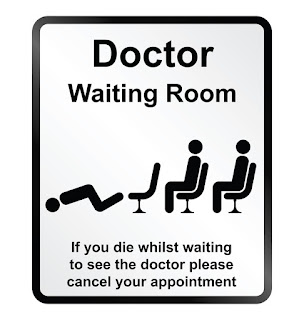 All the seats had been taken. It was either stand or I could sit on the little magazine table. I chose the table. Screw 'em. It was a tight fit. A lady and her girl child held the place directly to my right. I removed my hat and placed it on my knee and began to read.

The room was hot and loud and a woman of twenty or so was deep into a loud conversation in Spanish and an older gentleman tapped a steady rhythm with his cane and my neighbor and her child spread out their snacks and began to shoulder the space between us which forced me shift close to the wall, and I was within seconds of walking the hell out. Yet, I held.

The little girl asked, "What kind of boots are 'dem? They sure are shiny."

Me, "They are called engineers boots."

"Why they so shiny?"

"Because I shine them."

Her mother glanced over and told the child to not bother the man, gave me a 'look.' I scooted, some more.

I went back to my book - Private Battles, if you want to know. The child returned, stood and moved in front of me and touched the toe of my boots. "How you say you gots 'dem so shiny?" I closed the book and said, "Hard work." The mother reached and jerked the little girl back to her bag of potato chips.

My name was yelled. I stood and walked back and the woman took my information and agreed I was worthy of their time and soon I was seated on a stool. I read. Thirty minutes later a very large woman entered the room.

I'd removed my hat and placed it on my knee, as is my habit. The woman gave me papers to sign, placed a blue rubber band around my arm. Uncomfortable, to say the least. All the while she kept her eye on the hat. I could tell it bugged her. I liked that it bugged her. Made me smile, it did.

"Well, now that you mention it, why the hat?" 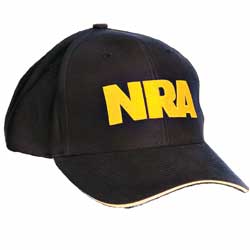 She readied the horse needle. "Make a fist."  I made a fist.

"Yes, its awful. Its hate. It tells people you like to shoot people and that you own guns."

Oh, this was good. "Really. This hat sends a message does it."

She slapped the needle deep into my arm...missed. Tried a second time. Missed again. It hurt like hell.

Me, "Are you new to the art of phlebotomy?"

"Huh?" My arm didn't feel good, at all. She reversed course and slipped  the projectile in again...and again. I was ready to punch her.

"Hey, Mister Gunman, did you drink water before coming in here?"

"Yes. Want to try the other arm...this one is about fried."

She was a big woman. She'd voted for Obama, and I'm sure had been tenth in a class of ten. Her, "You shouldn't wear that hat in public. There is a dress code, you know." 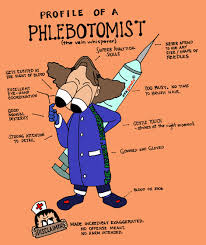 The words kiss my ass almost slipped from my lips, and would have, but she still held that needle and the job wasn't completed.

What I did say was, "Lady, what I wear and where I wear it is none of your business. Furthermore you are as safe now as you've been all day."

She finally hit a stream of blood. She finger thumped the first tube and reached for the second. I drew in a deep breath and waited as she slipped the next vile in place. "I take it you don't like firearms."

If looks could kill.

Silence. I asked a second time, "How?"

"They just do."  I heard a child scream. We're down to the third sample of blood. My arm feels like its on fire. Me, "So, my handgun jumps from its holster and kills people, all on its own, does it."

"I don't want to talk about it. But don't you wear that hat in here again. You hear me, mister."

I couldn't help myself. I'd had enough...

I stood and walked to the door, turned and told her as nicely as possible...

Two weeks later my arm is still black and blue.