The month of September fulfills me. It primes then gives me October which in turn prepares and loads me for hunting season and cooler weather. As a child Autumn meant a slight change to the color of our trees and chilly rain and windy dark mornings which kept the ducks low beneath the clouds, susceptible to the slightest squeak of my uncle's old and worn duckcall. 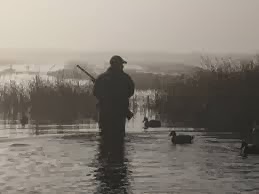 Long before sunrise he'd step into my bedroom, where I dreamed of sixteen point bucks and canvasbacks, to roughly shack the bed which inevitably spoiled my aim; I missed many shots while lost in dreamland. I'd tumble from bed and dress to find the house warm and filled with the wonderful scents of  perked coffee and fried bacon backed with a ting of Hoppe's Number Nine. His shotguns were always laid across the breakfast table, game bags hung from kitchen chairs, coats and boots spread at the door - a bed for the dogs.

She, his wife, made our lunch. He required bacon biscuits which she'd tightly wrap in old paper sacks and then pack inside a canvas bag along with two large Alladins filled with doctored coffee. Her biscuits were as large as my fist. For some reason she'd say, "I don't know what's wrong with ham..." She was strange, that way. 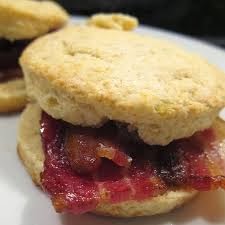 I was barely fourteen but still remember his International, a rust bucket of a truck that rode high for the ruts and how the drive to the blind took almost an hour with the constant flip and flap of the wipers - how the rain sheeted with the wind, the rattle of hard green seats and how I kept my shotgun cradled against the jar of the dirt road.

I too remember how I'd wipe the window for a glimpse of swamp or occasional peek of cattail filled canals - an indication of arrival. When you're a boy the anticipation of decoy placement and duck thick skies wears upon you. I was puckered for the kill.

It fell to me to hump the smelly burlap sack of decoys. I'd stand deep in the mud and reach over the bed for the wet sack of heavy and then make my way along the trail of cold water as the Nor'easter slammed my bent form. There was the thick salty smell of tidal marsh, the crunch of oyster shell, the faintly lighted horizon where deep dark clouds scudded before the wind and in the distance often the whistle of pintails. I was happy for my Woolworths heavy shirt. Still I shivered. 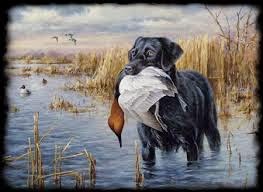 It was the rain and wind which kept the flights low as they sought shelter. The sixteen old wooden decoys and the small cove of sheltered water gave us our shots. We'd tuck inside the blind and find a place on the board, our seat. My one and only box of twenty gauge sat to my right, opened and ready. Then, we'd wait for sunrise.

Years have melted my memory of the shotgun. I remember it was a double, fairly heavy for a teen. Other than its gauge, it lines escape me. Probably a Savage or Mossberg, doesn't matter, it filled my dreams of ducks on the water. Even the hunt isn't important to me now. The dogs are long gone, as is my Uncle, a man I didn't truly like. He was just my ride. Whatever became of the shotgun I'll never know, it too isn't important. 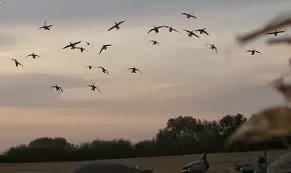 It's the captured mental picture of the cold mornings, the Nor'easter, scents of an Autumn breakfast, gun oils, decoys and flannel shirts, and oysters and saltmarsh - the feel of a still warm drake, the clunk of spent and fallen shotshells, the rise and fall of tides and the push of a good 'ole double against my shoulder - these I shall always remember. That, is what's important to me.

Please allow me the first cup of the morning, then we'll chat. Funny, business. One day you feel as if you need to stand outside and beg them to walk inside, the next find yourself screaming, "Leave me alone." Which I'd never consider. I love 'em all.

I hear a crow scream...Autumn has arrived.