Thank you and welcome to Shepherd K and Russell for clicking my follower button. As always I promise to reply to all comments, individually.

I'm very happy you're along for the ride.

A Nor'easter is blowing here, some light rain and fairly stiff breezes. After the geeks left this afternoon I went out to do a couple of chores and after my garage door fully opened I noticed a pile of debris on my driveway. Went about my business. Came back a few minutes later and a baby squirrel had made itself at home between two of my spare gas cans. The debris was its nest. Little critter shivered and had a bloody nose. For a second I thought about biscuits and squirrel gravy....
I went and grabbed one of my old leather gloves and bent and gently gathered the juvenile furball in my hand half expecting it to fight and bite. It surprised me. It simply sat there as if accepting its fate. I walked it out and placed it at the foot of the tree where I'm sure its nest had been prior to the winds. Afterwards I went inside and came back out with my Blackberry and it posed for me. It took some encouragement on my part to get the little booger to climb. Hope he makes it. Squirrel season is just around the corner and it needs size. 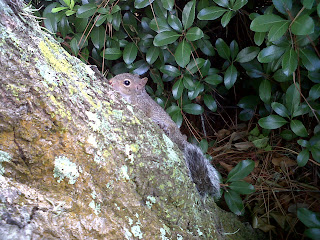 While unloading a load of 'stuff' and preps from our Sunday visit to Costco I noticed something odd with my travel trailer battery pack. The top was slightly off and when I looked inside the battery appeared to have blown up. Cracked wide open. Sent text to my friends to ask their expert opinions. Senior Chief thinks it just overcharged, and my buddy ShooterSteve said much the same. I think they'er both on the right path and I'll just add our hard summer heat to the equation. Marine/RV batteries aren't cheap. Guess I'll send an email to Washington and ask for a bit of that stimulus money. 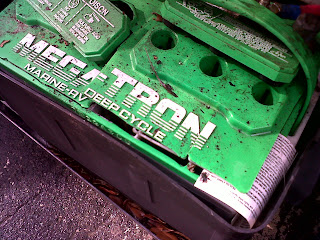 This is the first time I've used my laptop, at home, to write and post using wi/fi.  It feels, well, weird....but nice too. My home is now wired for the twenty first century. Gone all metro-sexual and stuff....big screen television with it ability to suck on the wi/fi signal, my Kindle (which I'm quickly beginning to enjoy, btw) and now my laptop. Since Sweet Wife and yours truly both use cell phones (land line is gone) I suppose we'll be victims of mother nature or some strange man-made disastrous situation sooner or later, and have zero comms when needed. Little dishes pointed towards the heavens rule our lives.

I like to give a quick thanks and welcome to my friend Russell for hitting my 'follower' button. Now, make a few comments and you'll be an official member of the club. Thank you, Bubba.

I have geeks in my house. Infestation of boys with pen holders in their shirt pockets, wires hang from their ears; it's ugly.

I will do my best to return this afternoon or, God willing, tomorrow morning. Nothing serious, the little boogers are working hard to bring me into the 21st century. My life will be richer for the experience. I hope...

They tell me my time online is up; snippy little whippersnappers. See 'ya later. 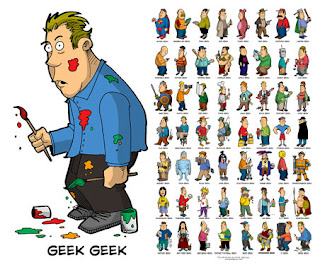 Stephen
Posted by Stephen at 9:27 AM 4 comments: