Is the study and collection of stock and bond certificates. It has been a half-hobby of mine since 1973 when I first entered the world of investments when the New York Stock Exchange was still an American company. This was back in the days of brokers and long distance screams of terror when my novice investments didn't quite pan out.

I've always had a great interest in the history of Wall Street, and as a result while browsing among the dust and cobwebs of an old building one day, I came across a box filled with canceled stock certificates. Beautiful pieces of history, art really, with dates back to the early and mid depression years. I asked the owner of the box his asking price. He replied, "Take them. They ain't worth spit." He was wrong.

Yesterday one of my customers came in and gave me an envelope and without so much as a word turned and walked out. I thought, 'now that's weird.' I opened it and inside I found this: 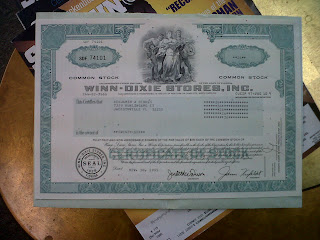 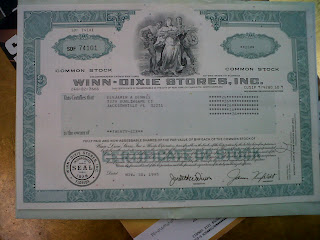 My friend had given me one of the last certificates issued by the old Winn-Dixie food store. A few months after its issue date the company went out of business and later reopened under new ownership. This is a twenty-six share certificate.

I now understood why he didn't speak. He was a Winn-Dixie executive prior to their bankruptcy. He'd lost his life savings during the crash of a once proud Southern company.

See, a piece of art stamped and colored by history.

Like I said, I don't actively seek out stock and bond certificates these days, but then again, I never pass over a piece when I stumble across a find. 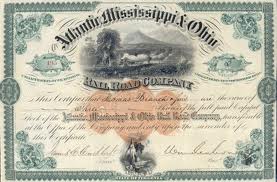 Fun hobby. I frame mine and display them in my office.