My friend Duke has part two of TEOTWAWKI posted over at his place...please, give it a read. Take notes while you're at it.

A Lesson Learned, the Hard Way

A gentleman came into the shop this morning; hang dog face and all. Asked what had happened. Said his truck and wife's car had been burglarized overnight. Bad enough that, but he'd had a habit of storing his personal carry piece and several other weapons inside said truck.

Boys in blue arrive and smug the surfaces in a vain attempt to find prints. Of course they fail yet get a tip from neighbor lady and within hours find the two punks responsible for the damage and retrive the guns.

My customer is all happy and stuff. He smiles at the cops and ask when he may have his carry piece back...they laughed and said, "Soon."

"How soon," he asked. Their answer was after the trial. Months, perhaps.

Lock you trucks and cars after you remove your weapons. I should know. Several years ago I attended a rifle shoot. Arrived home very late at night. I was tired and in my stupid half-sleep stupor failed to remove my guns from my truck. Went to bed with all intentions of doing so the next morning. I used very poor judgment, thought, well hell I live in a nice neighborhood, well off the main roads, my precious cargo will be fine over night. See it coming, don't you.

I lost a Colt HBAR AR-15, a $1,500.00 rifle. I also lost a Springfield XD-45, another $600.00. Cops arrived, looked over the scene and told me whomever took my items knew me. They said it had to be someone of close personal acquaintance. Damn sure didn't make me feel any better, in fact my blood lust hit an all time high. I wanted to kill, something. All because I used poor personal judgement. At least my truck was locked and I was able to give the police serial numbers.

I asked why they thought the thief was a personal friend. Their reply was simple...you cannot see your truck from the road. They didn't steal magazines (loaded worth thirty five dollars each) or any of the other gear such as binoculars, spotting scope, armorer tools, filled ammo cans and other small items. Just the guns. Cops said one day they'd screw the pooch and try and sell or pawn the items. Sooner or later I hope to have my weapons returned. Until then, I'm watching you....waiting....make peace with your God while you have time, because if I find you with my rifle...may God bless your soul. 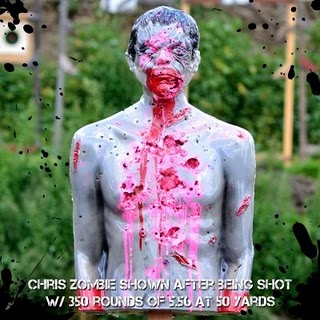 Lock your trucks....after you remove your guns.

To my good friend Rob. My friend as you know I reply to all comments, good or bad, as soon as possible. For the rest of you, if you haven't as yet visited Rob's blog, please do so, he's witty and has a way of presenting current events in a pleasant manner.

Again, welcome Rob, and thank you.

Stephen
Posted by Stephen at 9:07 AM 5 comments: