Hello, My Friends...it's been a busy weekend. A few days ago we purchased a new television. One of those fancy newfangled critters, flat and wide with all the geegaws and gadgets.  Our son said we were living in the stone age with our old tube television; guess he had a point.

So here it sits atop our nice oak entertainment center, a shiny new thing full of digital blood and pixels and wireless internet bringing us the pretty people in all their pimpled high definition glory. Only took the Dish Network geeks three hours to install the new black box this morning. I even made them coffee. Three hours, did I mention that little fact...three hours. All to remove one little black box and install a new dish on my roof and program our new television. One more time; three hours. Great day in the morning.

They leave and I can't figure this darn thing out to save my soul. Call them. What, they ask. Felt like shooting the damn thing. Finally I believe I have a handle on it. Sure is a pretty picture though.

Now I have a pile of old equipment and our old television to sit on the street tonight. Bet it doesn't take some scrap dealer twenty minutes to take it. Mean as I am though I cut the cords from each box and the television. I save them. Hey, you never know when they'll come in handy. Yes, I'm weird.

As it's a Monday and my official day off, and as I have used my day off for once, I hopefully will be able to pick up Little Bit from school this afternoon. I'll spoil her with a fastfood meal. Her father hates it when I buy her 'bad' food. See me smile. 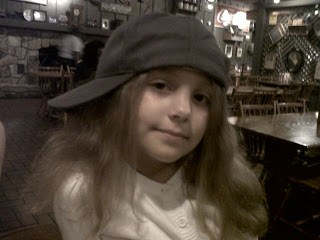