If we owned a doghouse I'm fairly certain it would be my residence for the rest of this year. I hate to tell on myself, really I do, but to carry this guilt for the rest of the evening would, I'm sure, do great damage to my marriage. You see, she isn't aware I shot out one of her dining room windows.

Arrived home about 1600 this afternoon. Since Monday is my normal day off I thought I'd close the shop early. After all business was slow, and I had a couple of chores I wanted to tackle. Time on my hands, don't 'ya know.

My first order of business was to run a line check on our irrigation system. As each station cycled I followed along and observed each sprinkler carefully for trouble. Station four soaks our backyard. 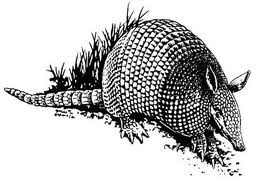 Just as I took a step around the corner of our home I spotted movement under our deck. Two whopping sized armadillos. Two. I retreated for aggressive action.

A few moments later I'm back and armed with one of my little Rossi .22 pump rifles. Now, here I must pause and build a case for my defense.

Our home has a brick walkway laid on three sides of our yard. The bricks, though firmly bedded. are subject to movement by tree roots. Not all the bricks are even with the rest and it's very easy to catch the toe of your boot and stumble if you (me) aren't careful.

It's hot. I have copious amounts of stinging sweat in my eyes (which didn't help my vision) and my breathing was uneven from the quick dash inside. Pretending to be a woods wise Indian, I eased around the corner and spotted my nemesis - the hated saber toothed armadillos.

The suckers held tight to the underside of the deck. Target acquisition was difficult. I held my breath, took a bead on armadillo one and fired. The sucker flipped. I shucked the bolt to reload and the friggin rifle jammed.  Booger number two was about to make his escape. I quickly reached and released the magazine tube which takes pressure off the rounds, and then, slammed home the bolt.

Problem is as I worked to load a fresh round into the chamber, I like a damn fool, tried to step forward in order to gain a fresh sight picture on almost dead armadillo number two. Remember, hot, excited, killer instinct has kicked into high gear - I wanted blood.

My boot caught a fraction of an upturned brick, and like an amateur, (Oops, get ready.) my finger still caressed the trigger. I had not fully released my booger hook. On this particularly rifle if you hold the trigger back and slide the bolt home it will fire. Well, guess what.

I stepped, stumbled, and fired. Remember folks, muzzle awareness is very important to firearms safety. By the way I missed zombie armadillo two.

But, I shot a pretty round hole in our formal dining room window. Low, on the frame. Clean hit. I felt like a fool. (Go ahead, laugh.)

It's a tiny hole. Nice and clean. Glass fractured pretty as you please. It's amazing what a tiny .22 short will do to metal and glass. Never underestimate a .22's ability to kill game or its decorative effect on windows. 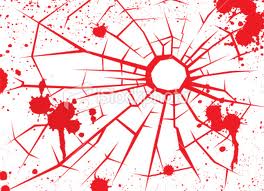 I held my head low and slowly walked back to the garage and into the house. Didn't even wipe my boots, just tracked inside to the dining room. I expected severe collateral damage. Her sheer curtains took a hit. I bent and carefully tracked the path of the bullet. As expected it shattered and two small pieces entered one leg of her (Lord help me.) antique china cabinet. I ran and grabbed a tube of that stuff that restores the color of wood and wiped away the evidence.

I quickly scheduled an appointment with a window repair service.

There. It's done. I've confessed. Maybe I'll wait for the repair people before I tell her....it's possible she won't notice the damage.