As of 11:00 p.m. eastern, my brother is still in the emergency room. He is not allowed visitors. His immune system has been compromised by a raging infection in his kidneys, bladder, and prostate. Doctors found a golf ball sized tumor on his prostate. A specialist in infectious diseases has been called and is on the case.

Thank for your kind words and prayers.

It will be a long night. 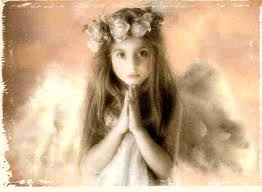 Email ThisBlogThis!Share to TwitterShare to FacebookShare to Pinterest
Labels: family

Forgot to mention my friend Duke , a very valued member of our group wasn't able to attend yesterday's tower fun. He's attending his son's wedding. We wept. Also our good friend and another valued member of the group, Jim, is on an extended leave of absence. We miss him. He's the group's medic. Come back soon, our brother.

I'm sure if I had failed to mention them I would have gotten one of these. 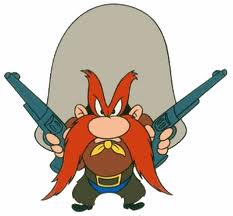 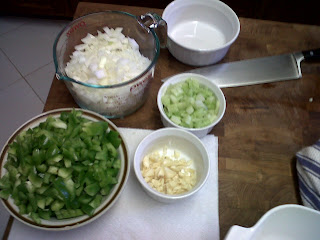 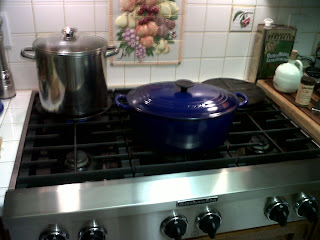 Email ThisBlogThis!Share to TwitterShare to FacebookShare to Pinterest
Labels: Duke and Jim and dinner preps

I'm sorry but this will be brief. I've just received word my younger brother has been taken to the emergency room with a life threatening illness. Not much I can do at present, other than prayer. So this will be a post of pictures and a few notes.

Now to bring you up to date. Since my last adventure with my group and the post I wrote of the trip, I've added a few new followers. To bring you nice people up to date allow me a moment of explanation. I had an idea many years ago of forming a group of like minded individuals to support and defend each the other in times of either man made or natural disaster. Simple, huh. Try it. But fighting all the odds against, I succeeded. This success was due to the hard work and time of the nice men and women that joined hands with me in this adventure. They are the individuals due all the credit. They took my dream and made it possible.


I am still very reluctant to expose much about our group. But, by using careful wording and revealing nothing of our location, preps, and other details, I believe it safe to chat with you good folks of our labors.

Recently we were given a tower, a damn fine antenna tower, a beauty, all we had to do was move it. Ever hand dug and moved a 40 foot tower that's had the base sunk into four feet of concrete. It isn't easy. By utilizing hundreds of feet of rope, pulleys, a jeep, shovels and muscles and a few carefully chosen curse words, we 'got 'er done' in record time. 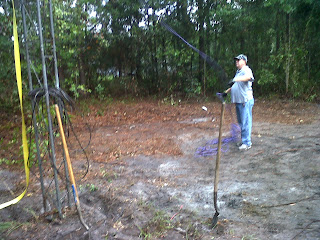 I ask, please excuse my poor photography. Above is one of our new members, let's call him AF1. The tower (left in the picture) still has vines as decoration. Here we're just beginning to dig. Little did we know there was a huge ball of cement underground. 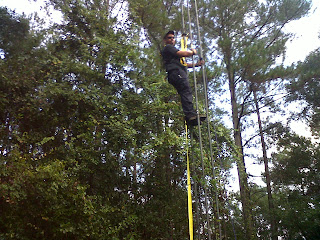 This fine looking feller is Senior Chief. He has just climbed the tower (harnessed) and is striking a pose. He's attached a strap and hardware. We used a block and tackle in a large pine, and three other ropes to ease the tower and antenna to the ground. We did not want the antenna (at the top of the tower) to be harmed. This is one nice and expensive gift (thousands) and treated it as such....as you can imagine. 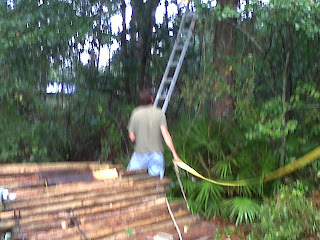 Sorry for this blurred picture. This is Rebel steadying the ladder for ShooterSteve as Shooter secures the block and chain in the pine. From here we ran a rope to the western side of the tower. 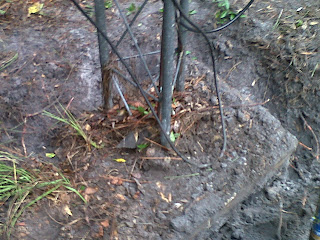 We begin to dig. 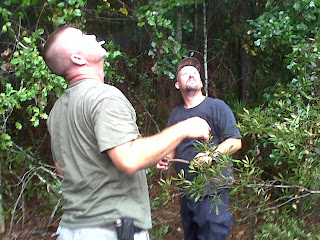 Above (as is the rule for all my photos) here we have ShooterSteve (best master electrician in North Florida) and Senior Chief. I think they've spotted a squirrel and are debating the best course of action to bring it down. They chose sticks. 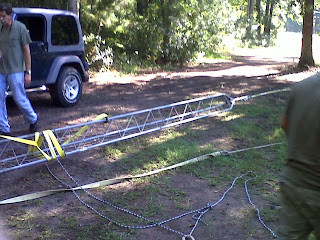 An hour or so later, success. It's down, and more importantly, with no damage. Now the work begins. Rebel used his Jeep, and with the help of our new friend, Tim, eased the beautiful tower down like an Angel's caress. 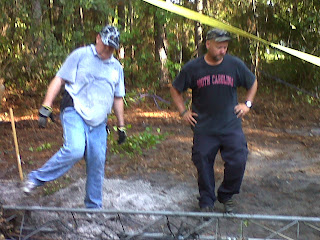 Above we find new recruit, AF1 and Senior Chief dancing an Irish jig in joy. 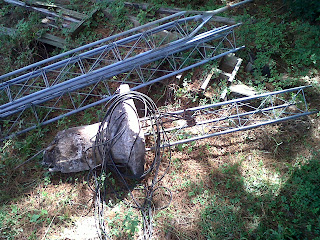 There she rest. After a couple of hours of tractor work (Thanks to my Father's loan of the tractor and my nephew Dusty's tractor skills, we had the tower with its sock of cement back at the Boar's Nest. I swear I lost ten pounds. The heat and humid conditions were awful. Time for lunch on the Boar's Nest deck. 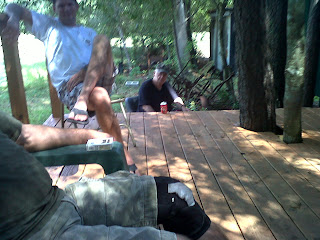 My Father, in his electric wheel chair, sits just off deck as the rest of us take a well deserved break and eat lunch. The fellow to the left of my father in the boys pants and slippers (we'll correct his dress soon) is AF2, soon to be an auxiliary member of our group.  He is the nice guy that gave us his antenna tower. The least we can do is add him to our group, he does qualify. He just needs to complete a few steps in the process. He will make a very nice addition. 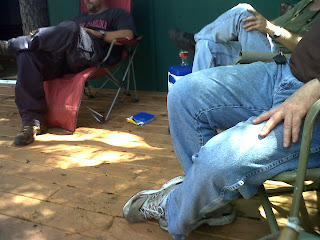 Another random shot of the legs of AF1 and Senior Chief....at parade rest.


I need to post and run. I've a dinner to cook, calls to make. Little Bit and her parents and little brother, Sport Model, are eating dinner with us tonight. I shall make a Shrimp Etouffee today. The shrimp stock is simmering as I write. Ever peeled three pounds of shrimp. It's fun.

Hey, this has turned into a long article for one that began as a quick note. Please, have a good evening.