I like this picture. Stumbled across it this afternoon and just want to share it with you. 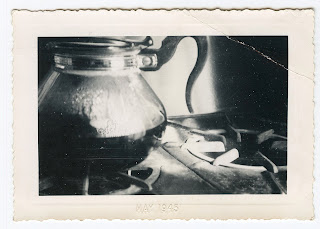 Update, thanks to Old NFO we have a date of 1945. I had to physically raise the picture to read the date.

The lakes water is warm and deep and tannin stained like over boiled tea and it holds lily pads and cattails, and along its shores are deep pockets of shade and the odd fallen tree trunk where the bluegills hide from the bass and the boat floats just outside the edge of the lily pad field.

The boat is old. It was constructed of  cypress milled when Hoover was president and has three seats and a forward deck where the old man sculled with one paddle. He sculled in silence. The old man had the paddle locked the length of his right arm and his skill and experience barely moved the dark water.

The boy sat in the back. Between him and the old man you will find a two gallon can of red wigglers, small worms, freshly dug before sunrise and covered in dark cool earth. The boy liked the scent of them, and of the musky odor of fish beds and of the Springs chilled early morning air, and he even enjoyed the sharp brambly cloud of cigar smoke that issued from the Old Man's habit.

They each held Calcutta cane poles of six or seven feet with lines tied their length with small bream hooks and the boy had added a slim float of cork locked in place with a thin piece of twig. He liked the word, 'float,' as he had read of its proper term in one of his outdoor magazines and refused thereafter to call it a  cork or bobber. Float seemed to match his idea of correctness. It held class, so float it was but the Old Man thought it silly and yet the boy didn't care.

The Old Man insisted the red and white plastic bobber with its top activated spring button was the only gear one needed for bream and he stubbornly stuck to his way. The boy thought him silly too. 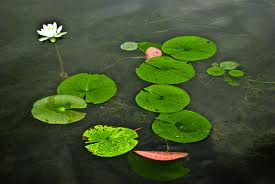 The Old man worked them close to the pads and without a word the boy extended his arm and the line slipped out and as the worm neared the water he dropped his wrist and the bait slid silently beneath the tannin waters and the boy waited as the worm sank.

The sun on his back felt warm and a slight puff of wind touched his hair, blond and long enough to just touch his shoulders. He was lean and tall and just to the point in his life where girls had become very interesting - but not today.

The bluegill simply pulled without fuss or fanfare and the boy gently applied pressure; no jerks or squeals of delight, just steady pressure and soon the slab sided fish flopped on the deck and the Old Man turned and smiled.

The boy smiled right back and gathered the bluegill and removed the hook. The fish was the size of both his hands held together. Just ahead, a field of cattails held his interest and he whispered, "Let's ease up and try the bulrushes." He'd read 'bulrushes,' too.

"Not yet, have patience."

As the boy rebaited he listened. In the distance he heard a lonely woodpecker hammer a tree and red winged black birds sing and felt the wind push and scud the clouds towards the southeast. It had been a long winter, a cold dull gray period of hard work and loss. It felt good to be back on the dark water. 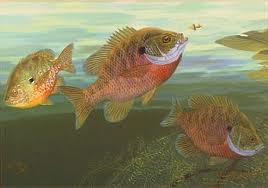 The Old Man had boated two fish in the time it took the boy to rebait. The boy took the fish and strung them by their gills on the grayish rope fish stringer. He tied the stringer to the edge of the boat and lowered the fish into the water. The boy always paused to watch the fish gently fin and gulp for air but he knew they'd die quickly and he hated how they'd grow stiff and how their colors would inevitably fade, as if the water itself was jealous of their beauty and bleached the reds and blues for spite.

The Old Man glanced back at the boy and asked, "You still working down to the gas station 'wid old man Butler?"

The Old Man leaned and spit. The boy waited. He knew, for certain, the day would be long in interrogation. The boy had fished with the Old Man for many years. They were close in the way two kindred spirits can be in spite of their age difference.

The Old man wasn't related, but to the boy he was family. The Old Man was his neighbor. The Old Man was his father figure, by proxy. He also owned a boat, and a big worm bed and very nice vintage fishing lures with bait-casting reels and rods built by the likes of Heddon and Mitchell Garcia and South Bend and these names were important to a country boy in love with books and magazines devoted to the outdoors. 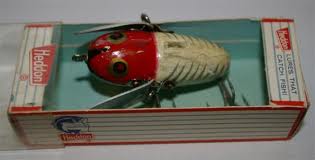 The fact the Old Man held such precious and valuable items, all that wonderful fishing gear, was important to the young man because the boy was poor. The boy's gear was simple, the equipment of peasants - the lower working class. He'd read about peasants and the hoards of bent back labor in one of his books too.

For the Old Man to own such nice equipment meant only one thing to the boy - the Old Man was rich and when the boy discovered, by snooping around the Old Man's house, his friends firearms and hunting gear, well, hell, the boy was certain they'd be friends forever.

After the Old Man spit in the water he turned back to the boy. The boat had drifted with the wind and as he shifted and sculled them back towards the lilies he continued. "Hate to change the subject but how do you feel?"

The boy understood and just shook his head, wiped a stray piece of hair from his eyes and flipped his line out towards a lily bloom. "I'm fine."

"Ain't no reason in lying to me, young man." The Old Man sighed. "I'm sorry about your friend. Awful thing. Your mother said you watched, witnessed the shooting. That true? The paper didn't give much on the details."

A few weeks prior the boy had seen his best friend murdered, shot. The killer, a kid, had stepped around the corner of the post office in their small village, had moved fast with a little .22 rifle and had shot his friend in the head.

The dark waters held the boys attention.  He took a finger and placed it just above the surface and gently tapped. The ripples from the point of impact spread gently away and faded, after time, into nothingness.

The Old Man waited. Then, "I understand. It's hard when we lose friends. It's even tougher when you witness their passing. But, boy. Look at me." The boy glanced at the Old Man. "Son, time will heal your hurt. Do you understand me?" 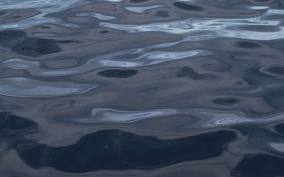 The boy didn't respond.  He subconsciously reached and touched his belt to feel for his handgun. It wasn't in place. He'd been in the habit of wearing the old firearm since he'd reached his tenth birthday when he'd been given a long talk by his father, the game warden, and then permission on the condition he never shot himself in the foot. That was the year before his parents had divorced.

When at home, in the country, it had been his constant companion. Then, the day after, for some unknown reason he'd failed to buckle the holster around his waste.

The night after the shooting he'd experienced awful nightmares.

The image of blood on the rear window of the car. The door open and his friend slumped sideways and how the street light highlighted the streams of gluey crimson on the glass, like little rivers of red on its way to form a lake. The clean tiny hole above his friends left eye. He even dreamed of the pool of vomit he'd left as evidence.

He wanted to fish. He wanted to watch, afterwards, as his mother and the Old Man fried the bluegills and hush-puppies and he wanted a big plate of grits soaked in butter and a tall glass of iced tea.

He just wanted to read or walk a creek bank or swim or take the Old Man's boat down to the river and sling a River Runt for bass. Or, wait until mid-night and soak a worm for catfish. He didn't care if he ever held another rifle or handgun in his life.

The Old Man waited. The boat neared an exposed log where a turtle had climbed to soak in the warm sun. Somewhere nearby a fish jumped. The boy could smell the bedding bluegills, a musty scent and unforgettable. The cattails swayed in the breeze and the boy pulled his line and gently sat the pole to one side and stretched his legs. The boy reached behind the seat and pulled a now warm Coke from his bag and without a look in the Old Man's direction, "You wanna a Coke?"

"You want an answer?"

"I'm your friend. I always expect truthful answers from you." 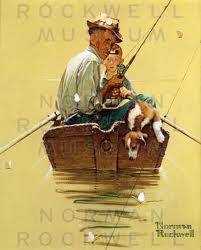 "Life sucks and I hate it and I hate the way I feel and I don't want to shoot anymore and I have awful dreams, and..."

The Old Man cut him off with, "It's okay, Son. I understand. You must believe me when I tell you time will heal your wounds."

Then, the boy screamed, "Why do people always give me that shit? Why? It didn't make my father come home and I haven't seen Jesus yet and God never answers my prayers. Why?"

Without a moments hesitation the boy stood and dove into the dark water.

Later, on the drive home, as the Old Man's truck rattled and shook and as the boy sat shamed faced and wet, the Old Man asked, "Feel better?"

"I'm serious. Time will heal your wounds and you will shoot again, and life will get better. Take some time off from books and guns and shooting and game and fish and pay attention to the girls. They have a way of healing a man's soul. Trust me. We'll fish again next month. Okay."

"Yes, Sir. You gonna tell my mother I acted the fool today?"

He kept his word, and the Old Man was right.

The boy loved the Old Man...even when he too passed on to those dark waters.