October 1st, Larry Correia, and Mike Kupari, have a new novel hitting the bookstores. If it's as well written, and it should be, as the rest of Larry's works, it'll be a humdinger.... 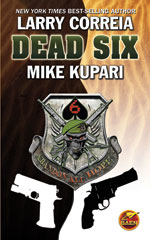 Here's a snippet from Larry's blog about Mike.

This is Mike’s first book, and it is a darn good one that deserves to be read. For those of you who don’t know, Mike is an EOD Technician, currently defusing roadside bombs in Afghanistan. He will still be in Afghanistan, risking his life and being awesome, when his first novel appears in stores. Places like NPR can talk about thriller writer street cred, but Mike plays high-explosive chess against terrorist IEDs before breakfast.  Most first time authors are super excited to do their first book signings, but Mike can’t because he’s deployed… Think about that for a second… He can’t do book signings for the really nifty book he wrote because he is too busy DEFUSING MURDER BOMBS.

Email ThisBlogThis!Share to TwitterShare to FacebookShare to Pinterest
Labels: Books